One of Europe's largest web hosting companies is entering the North American market. French hoster OVH, which operates more than 120,000 servers, has begun testing its new data center in Beauharnois, Quebec, which will serve as the launchpad for its entry into the U.S. market. 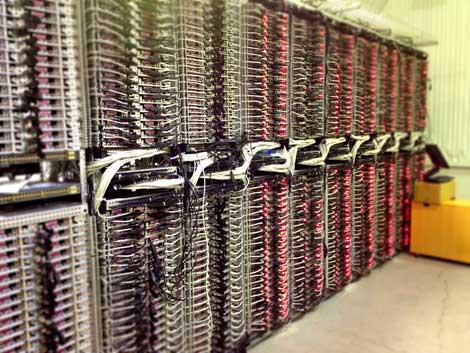 A high-density rack of servers being tested at the new OVH data center in Quebec, which will serve as the entry point in the European hosting company's entry into the American market. (Photo: OVH)

One of Europe's largest web hosting companies is entering the North American market. French hoster OVH, which operates more than 120,000 servers, has begun testing its new data center in Beauharnois, Quebec, which will serve as the launchpad for its entry into the U.S. hosting business.

The push into the North American market is the latest expansion strategy for OVH, which now has more than 120,000 servers running in its data centers. That update once again puts OVH atop our list of companies that publish their server counts, moving ahead of Akamai Technologies (105,000). (See Who Has the Most Servers for the list).

DCK readers may be familiar with OVH for the innovative Cube-shaped data center it opened last year in Roubaix, France, which houses servers in an exterior corridor built around an open center, allowing for easy airflow through the facility.

The new data center is also distinctive - a fomer Rio Tinto Alcan alumnium plant with an airflow design reminiscent of the Yahoo Computing Coop design, designed to allow waste heat to rise and exit through a central ceiling vent. The building is located alongside a dam that will provide 120 megawatts of hydropower to support the facility. OVH estimates that at full buildout, the facility could house as many as 300,000 servers.

OVH has just begun an "alpha" testing stage for the facility in which it is offering free servers to customers who can accept periodic downtime as the facility is fine-tuned. An expanded beta test begins in May, followed by the official launch in August with a service level agreement (SLA) based on 100 percent uptime.

Octave Klaba, the CEO of OVH, discussed theQuebec data center and the company's North American strategy in a series of posts to the OVH forums.

"This is a unusual strategy to attack the American market, right?," Klaba wrote. "Not so much. Our DC is only 8ms to New York and 19ms to Chicago. We are very well positioned to provide dedicated servers and cloud computing with a quality of service intended on reaching 25 percent to 30 percent of the U.S population. In parallel to the data center, we started in the establishment of a vast American network that goes through all major cities to United States and Canada."

That network will be fully deployed for the August launch. The Quebec data center is first step in a broader expansion of OVH's infrastructure into North America, Klaba says.

"North America is a territory so vast that it takes at least three large data centres to cover the entire population," he says. "We are in phase A, which is taking account of the East coast. Later we think do the same to the west and certainly the center."

So, having evaluated Amerca's Internet geography and where to locate data centers, how did OVH wind up in Quebec? The comany scouted U.S. location  for two years for sites that would work with its RBX-4 "cube" design, and initially thought Boston or Philadelphia would be the likeliest destinations for its East cast data center. At first it believed Quebec would be too cold.

"But when we saw the RTA building, we said "holy cow!" because within minutes, we could see what was missing when exporting our technology to a very cold country," said Klaba. "The building was used for melting and casting aluminium. The shape of the building integrated natural ventilation: the air between the two sides of potroom to extract the hot air out the middle of the roof - exactly as our RBX4. So we had the idea to put RBX4 inside the building of RTA to make a double air inlet, a kind of double wall. And in winter we can preheat the cold air with the heat produced by servers."