Akamai Technologies is now running more than 105,000 servers in its global content delivery, the company confirmed today. The company's content optimization network has servers at data centers and ISPs in 78 countries and more than 1,900 networks. 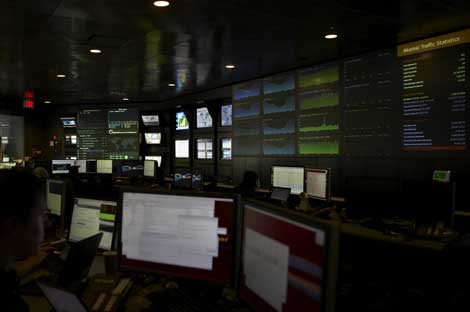 A look inside the network operating center for Akamai Technologies, which tracks web traffic at hundreds of locations around the globe. (Photo: Akamai)

Akamai Technologies is now running more than 105,000 servers in its global content delivery, the company confirmed today. The Cambridge, Mass. company places its caching and content optimization servers at data centers and ISPs in 78 countries and more than 1,900 networks. The massive infrastructure - which Akamai calls its Intelligent Platform - handles tens of billions of daily Web interactions for companies like Audi, NBC, and Fujitsu, and organizations like the U.S. Department of Defense and NASDAQ. The company estimates that its network delviers between 15 and 30 percent of all Web traffic on a given day.

Akamai's new server count places it atop our list of companies with the largest server infrastructures, just ahead of SoftLayer and European hosting giant OVH. The list is based on companies that publicly report their server counts - which doesn't include many of the largest providers like Google (estimated at 900,000 but not confirmed by the company).

This week Akamai (AKAM) concluded its acquisition of Cotendo and its integrated suite of Web and mobile acceleration services. For more of our coverage of the company, see our Akamai Channel.