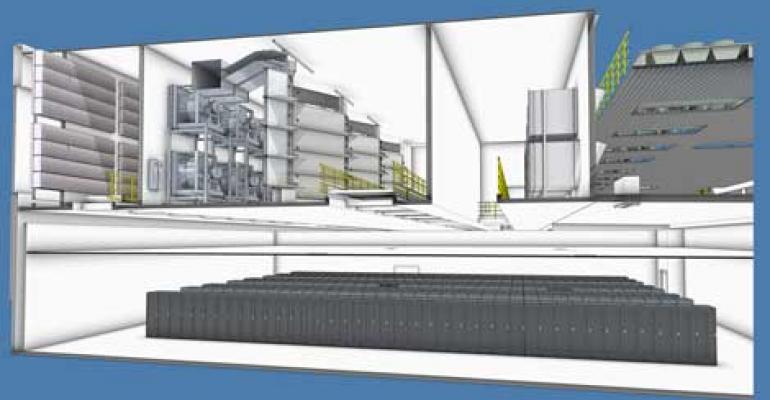 In its new V2 facility, Vantage Data Centers has taken data center design concepts pioneered by "Internet scale" data centers in remote locations, and implemented them in the heart of Silicon Valley. The result is a data center that matches the energy efficiency of Google's faciliities and implements key design components of Facebook's Open Compute Project. 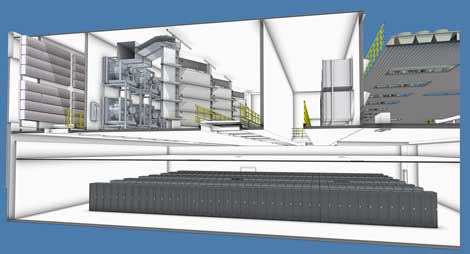 A cross-section of the design of the Vantage V2 data center in Santa Clara, showing the "penthouse" cooling plenum on the open floor, which introduces cool air into the data hall on the lower level (Source: Vantage Data Centers).

In its new V2 data center, Vantage Data Centers has taken design concepts pioneered by "Internet scale" server farms in remote locations, and implemented them in the heart of Silicon Valley. The result is a data center that matches the energy efficiency of Google's facilities and uses elements of Facebook's Open Compute Project, all within a multi-tenant campus in Santa Clara.

The V2 data center is delivering a Power Usage Effectiveness (PUE) of 1.12, placing it among the world’s most energy-efficient data centers, Vantage said today. The facility was fully pre-leased to an undisclosed customer, which worked closely with Vantage to customize the design from the ground up.

The two-story data center features a "penthouse" cooling system that uses the entire upper floor of the building as a plenum to process outside air for cooling servers, similar to the Open Compute design implemented by Facebook last year in its first data center in Prinevlle, Oregon.

V2 has an initial power capacity of 9 megawatts, but was designed for "vertical scalability" - the ability to double its capacity to 18 megawatts within the same physical footprint. This will allow the tenant to scale up its power density by refreshing its hardware and installing more powerful servers, as the existing cooling design is already optimized for the higher densities.

“V2 represents an entirely new data center vision, combining the option to lease space within a customized facility with the ability to grow within an existing building without disruption and with energy and operating expense savings on par with the world’s most energy efficient data centers,” said Jim Trout, CEO of Vantage Data Centers.

"V2 was built with unprecedented tenant collaboration, integrating decades of Vantage engineering and design expertise with tenant expertise and insight into critical requirements and opportunities for cost savings," Trout added.

The design approach drew praise from one of the leading experts in data center energy consumption.

"Vantage’s collaborations with their customers are the closest thing I’ve seen to an integrated whole systems design process that involves two separate institutions, and that’s not easy to do," writes Jonathan Koomey, PhD, Consulting Professor of Civil and Environmental Engineering at Stanford University, in his forthcoming book Cold Cash, Cool Climate. "Typically such processes are found in product design inside companies like Apple, where the designers have complete control, but it’s rare in the data center industry for separate companies to coordinate in this way in facility construction."

As a wholesale data center provider, Vantage builds data center space and leases it to customers. Most multi-tenant wholesale space is built using a standard design that works for a broad spectrum of potential tenants. Leasing the entire V2 facility to a single user gave Vantage the flexibility to pursue a customized design, effectively shifting the project to a build-to-suit approach.

While many facets of the V2 facility adapt Open Compute design concepts, there are also differences. Silicon Valley has a warmer climate than the Facebook site in Oregon, so the cooling design was modified to include a DX cooling plant, which allows the facility to shift from outside air to mechanical cooling when the temperature gets warm.

But it retains the duct-less cooling design, in which cool air moves through the multi-chamber upper plenum and drops into the server rooms from above. To scale capacity from 9 megawatts to 18 megawatts, Vantage can add UPS units and generators on pre-configured pads. It also brings high voltage (480-400 volt) power distribution from the substation to the data center floor, minimizing power loss within the data center.

Vantage says its PUE measurements range from 1.10 when using outside air to 1.16 with the chillers running, resulting in an average of 1.12 - equivalent to the current average PUE for Google's fleet of company-built data centers (and just shy of the 1.08 reported by the fully-air cooled facilities run by Facebook and Yahoo).

While Google, Facebook and Yahoo built energy-optimized data centers for their own use, the Vantage design offers this level of efficiency to tenants. Vantage estimates that at a PUE of 1.12, V2 will save its tenant $72 million in power costs over 10 years, compared to a facility with an average PUE of 1.9.

Here's a look at the airflow design for the Vantage V2 facility (click forlarger image):

The airflow diagram for V2 provides a look at the cooling design, which allows for the use of outside air, a mix of outside air and server exhaust heat, or a chiller plant. (Source: Vantage Data Centers).