SeaMicro has adapted its many-core server design to work with Intel Xeon micro servers, significantly expanding the type of workloads that can run on the company's low-energy servers. 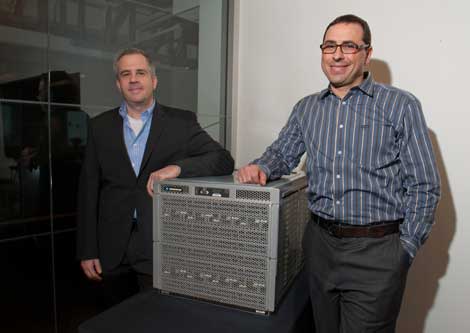 SeaMicro has adapted its many-core server design to work with Intel Xeon processors, significantly expanding the type of workloads that can run on the company's low-energy servers.

The new SM-10000-XE servers use 64 quad-core 2.4 GHz Xeon processors and low-power Green DDR3 memory from Samsung, bringing them together in a 10U server. SeaMicro says the new server will use half the power and a third of the space of equivalent computing power in competing rackmount units.

“Today we have announced the lowest-power, highest-density, highest-bandwidth Intel Xeon–based server ever built,” said Andrew Feldman, CEO of SeaMicro. “SeaMicro now brings the benefits of micro servers - efficiency and massive density - to small and larger-core workloads and to all parts of the scale out data center. Combining the SM10000 architecture with the Samsung Green DDR3 memory and Intel Xeon processors, SeaMicro now sets a new bar for energy efficient compute in the data center.”

Many Cores, Working Together

SeaMicro's first-generation servers used a mesh of up to 768 Intel Atom processors, which were initially deployed in mobile devices and use far less energy than traditional server chips. By harnessing a large number of low-power processors to work together, SeaMicro's SM-10000 offered dramatic reductions in power and space usage for that level of computing power. The use of the low-power "wimpy" cores made it ideal for Web traffic and analytics, but not appropriate from other workloads.

Adapting the SeaMicro architecture to use "brawny" Xeon chips expands its use to applications using Java and PHP, memcached caching and MySQL databases. "We want to bring these benefits to all parts of the scale-out data center," said Feldman.

One example: Mozilla Corp., the developer of the Firefox web browser, which is using two of SeaMicro's new Xeon servers in its production data center in Santa Clara, Calif. and will soon install another in its Phoenix facility.

“By offering microservers with small cores based on Atom and large cores based on Xeon, SeaMicro enables us to match our workload to processor type across the data center," said Matthew Zeier, director of IT Infrastructure and Operations at Mozilla. "With these two types of processors in the same system architecture, SeaMicro is able to meet the computational needs of our entire data center while driving down operating expenses by saving us power and space. We are a very happy customer.”

SeaMicro uses i/o virtualization technology that allows it to remove many of the components seen on a traditional server. I/O virtualization allows companies to save money by using fewer cables and network interface cards (NICs) to connect to networks and storage. Samsung's Green DDR memory is smaller and uses less energy than competing memory, gelling nicely with SeaMicro's focus on a sleeker architecture.

The Xeon cores are tied together through SeaMicro's updated Freedom Supercompute Fabric, which consists of multiple ASICs working together to delivering a low latency, massive bandwidth fabric with low power draw.

"The Freedom Supercompute Fabric is the only fabric that can support large and small workloads, enabling SeaMicro to plot a trajectory of servers that leaves no segment of the data center untouched,"  said Zeus Kerravala, senior vice president and distinguished research fellow at the Yankee Group. "Their rate of innovation is simply dazzling."

Feldman said he expected the new servers to be SeaMicro's most popular product. "We will definitely sell more Xeons ervers (than Atom servers)," he said. "Atom is newer as a footprint, so it's slower to be adopted. We've now adapted the same Xeon core people ar ealready using in a smaller footprint."

SeaMicro says the SM10000-XE are "plug and play" – customers can deploy it without modifications to existing operating systems, application software or management tools. The SeaMicro SM10000-XE is now generally available in the U.S. and at select international locations. The U.S. list price for a base configuration is $138,000. 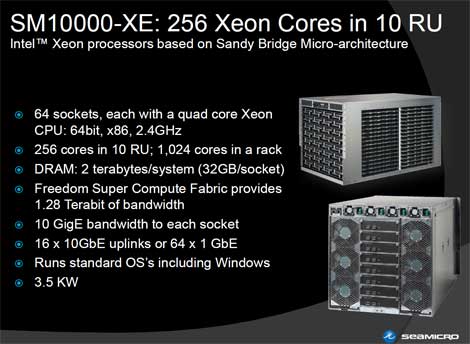