Facebook has invested $210 million to build and equip the first phase of its new data center in Prineville, Oregon, which has a capacity of 28 megawatts of power, the company and local economic development officials revealed this week. 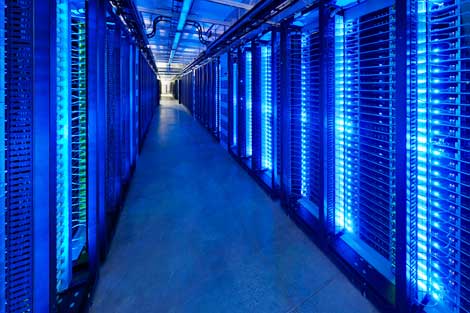 The interior of Facebook data center in Prineville, Oregon.

Facebook has invested $210 million to build the first phase of its new data center in Prineville, Oregon, which has a capacity of 28 megawatts of power, the company and local economic development officials revealed this week. The disclosures, released in an economic impact study and a community economic forum, were the first public confirmations of the cost and power usage of the Facebook project.

The new data, which shed light on the cost of operating Facebook's massive server infrastructure, emerges as the company is said to be prepping papers for an initial public offering, which would include additional details about the company's operations. The Oregon disclosures are part of Facebook's effort to reinforce the benefits of its data center to the local economy, amid a dispute over property taxes and questions from some Prineville residents about the impact of data centers on the small community in central Oregon.

For Prineville, Facebook is a big business operation - a fact reflected in the power required to operate the first phase of the data center. The 28 megawatts of utility power for the 300,000 square foot first phase isn't extraordinary for a data center of that size. But it stands out in Crook County, where all the homes and business other than Facebook use 30 megawatts of power.

Facebook began building its Prineville facility in early 2010, and began operations in April 2011.  The company recently began building a second data center identical to the first, and its long-term plans for the campus include an option for a third 300,000 square foot facility. Based on the power requirements of the first building, that could translate into about 78 megawatts of electricity to support the campus.

Crook County Economic Development Manager Jason Carr, who discussed Facebook's operations at a community forum last week, said the region will have no problem supporting that much demand from a single customer. Carr said the region has 720 megawatts of power available, with another 76 megawatts set to come online next year, and another 281 MW in mid-2014.

But that doesn't mean that power is available in the right place at the right time. There are reports that Apple and at least one other large data center user have scouted locations in Prineville, as Facebook’s facility has attracted interest from other companies seeking to leverage the town’s ideal environment for using fresh air to cool servers.

“I will readily admit that probably some of you have been skeptical or asked questions about what good a data center does for Prineville,” Carr said at the economic fourm. “Why are they here? What are we doing with them?”

The benefits of Facebook's presence in Oregon are outlined in a new study from ECONorthwest, which asserts that the Prineville facility has generated $142.7 million in economic activity in the state of Oregon. Much of that economic impact is from the "spillover effect" of Facebook employees and construction workers spending money in the local economy. ECONorthwest has done a similar study on the impact of Intel's operations in Oregon.

In terms of direct impact, the ECONorthwest study cites the following benefits:

The study, which was commissioned by Facebook, arrives as the company is in a discussion with state and local officials about its potential tax bill. In August the company was told that the state was required to "assess any property, real and personal, tangible or intangible." The company feared that the reference to "intangible" assets meant it could be taxed on the value of its brand.

The Associated Press reported last week that Oregon’s Department of Revenue will change its rules so data centers like Facebook's are assessed by local tax authorities, not by the state. Oregon lawmakers are continuing to press for a new law to codify this solution, which would be useful in discussions with companies contemplating Oregon for new data centers.

One area where local officials praised Facebook was its approach to water use. Carr said Facebook has used only 28 gallons of water per minute thus far, while other existing industrial users in Crook County use between 60 and 173 gallons per minute.