Google invested nearly a billion dollars in its Internet infrastructure in the last quarter of 2011, recording capital expenditures (CapEx) of $951 million. The increase is likely tied to a significant expansion of the company's global data center network. 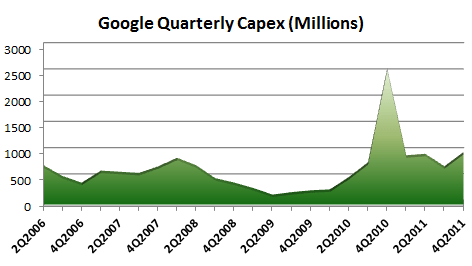 The increase is likely due to early work on a significant expansion of Google's international data center network. In recent weeks the company has announced four new data center projects, including three new facilities in three markets in Asia (Singapore, Taiwan and Hong Kong) and a new data center in Dublin.