A Data Center That Mimics A Mansion

A luxury homebuilder in Minnesota wants to build a data center that appears to be a mansion, allowing the commercial building to fit into a residential neighborhood. The facility would be used by FiberPop, a broadband content provider. 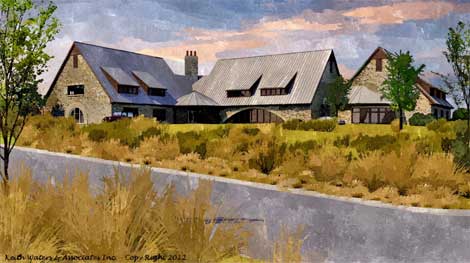 We've seen a lot of unusual data center designs over the years. Here's a new one: a luxury homebuilder in Minnesota wants to build a data center that appears to be a mansion, allowing the commercial building to fit into a residential neighborhood.

The first implementation of this vision is being reviewed by town planners in Minnetonka, Minnesota, where developer Keith Waters & Associates has proposed to build a 36,000 square foot data center for FiberPop, a local startup that wants to build a chain of "community-based data centers." The $30 million facility would be built on a tract of farmland that previously had been targeted for a subdivision of luxury homes from Toll Brothers.

The building would include an underground data center "bunker" and offices for FiberPop's staff. The data hall is on a lower level that also includes 60 underground parking spaces.

The building features a stone facade, sloped roof with dormers and plans for trees and landscaping. The proposal by Keith Waters & Associates also features residential housing, but a reduced number of units when compared to the Toll Brothers proposal. The project's backers say this will help retain the character of the property, which is currently zoned for residential use.

“We wanted it to fit into the neighborhood," FiberPop President Jim Louks told Finance & Commerce. "I don’t know if it’s a mansion. It’s a commercial building, and it has an upscale look to it. We’re building data centers in all kinds of locations around the country."

FiberPop specializes in high-capacity fiber to the home (FTTH) that will bundle television and Internet access. The company is currently considering at least one other potential data center location.

Data centers are typically located in commercial and industrial zones, often in nondescript buildings that provide both anonymity for security-conscious tenants and structural integrity to weather storms, earthquakes and other natural disasters.

These facilities have historically been focused on central business districts that provided a critical mass of customers, fiber connectivity and power. In recent years the development of large-scale data centers has shifted to rural areas offering affordable power and acres of land. But these data centers are usually targeted for sparsely-populated areas, allowing for "buffers" of surrounding land for added security and potential expansion.

In seeking to integrate a data center into a surrounding residential zone, the Minnetonka proposal provides yet another take on data center development. Is it a sensible approach? Or is this an isolated scenario that's unlikely to work in other geographies? Share your thoughts in the comment section.