How many data centers are there in the world? Emerson Network Power says there's enough data center space in the world to fit 5,955 football fields. The information was included in a year-end round up of industry statistics. 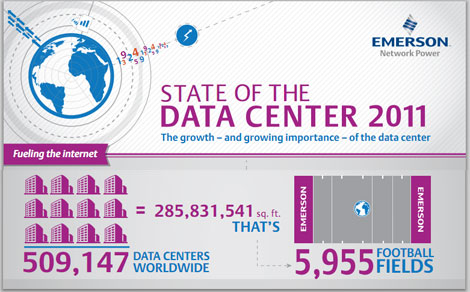 How many data centers are there in the world? It's a question that comes up all the time. It's also a difficult question to answer, because so many companies are secretive about their data center operations.

Today Emerson Network Power has put forth an answer to this question in "State of the Data Center 2011," a report and infographic that summarizes data points about data growth, data center facilities and the cost of downtime. Emerson says there are 509,147 data centers worldwide, with 285.8 million square feet of space. Or in more familiar terms, there's enough data center space in the world to fit 5,955 football fields.

What's the usefulness of this number? Many providers of products and services for the data center sector are keenly interested in the size of the potential market. Emerson Network Power says the data illustrates the critical importance of data centers in the global economy, and the need to keep them online - which is Emerson's business.

“Over the last several years, advances in technology, an increased reliance on the internet and social media as well as an increased focus on energy management initiatives have had a significant impact on the data center world,” said Scott Barbour, business leader of Emerson Network Power. “Data centers are the unsung heroes. This infographic illustrates how our reliance on them has grown exponentially.”

This year there will be 1.2 trillion gigabytes (GB) of data created, equivalent to 75 billion 16 GB iPods. That’s more than enough for every person on earth to own 10 iPods. All that data has to live somewhere, driving the need for more data center facilities.

The growing dependence on the data center means growing consequences of downtime, Emerson says. A study the company commissioned last year by the Ponemon Institute found that the data centers average 2.5 outages per year, with an average outage duration of 134 minutes. If that trend tracked over the global footprint of more than 500,000 data centers, that works out to 2.84 million hours of annual data center downtime.

What's the cost of that downtime? Emerson uses a figure of $300,000 an hour as the business cost of an outage, which translates into a total loss of $426 billion a year. That certainly reinforces the value of uptime.

Emerson's reports provides some fun with numbers. Is the estimate of 509,147 data centers in the ballpark? Or is the actual number of data center unknowable?

You can see the full infographic on the Emerson web site.