As Sweden celebrates the recent announcement that a new Facebook data center will be built in Lulea, one of the country's data center visionaries was outlining an alternative vision in which Sweden's cool climate embraces cool modular design. 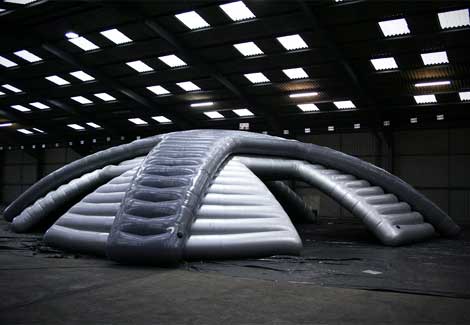 One of the first inflatable "command module" components created by MDC Stockholm, which is now being installed.

Will the huge cloud centers of the future by characterized by eye-catching visual design? Jon Karlung thinks so. The Swedish entrepreneur believes that data centers filled with cutting-edge technology should also look cool.

So as Sweden celebrates the recent announcement that a new Facebook data center will be built in Lulea, one of the country's data center visionaries was outlining an alternative vision in which Sweden's cool climate embraces cool design.

Karlung is the CEO of Modular Data Centers Stockholm, a new company formed to provide pre-fabricated modules to deploy IT capacity. MDC Stockholm  unveiled its vision for server farms in August, featuring futuristic modules that look far more stylized than the shipping containers that sparked the modular trend. The company is now deploying the prototype of its M1 module at a site in Kista Science Park near Stockholm.  The installation would include five modules: a power module, cooling module and three server modules that can each house the equivalent of 35 40U racks.

Economic development officials have hailed the Facebook announcement as a validation of Sweden's attractiveness as a location for large data centers. Karlung wants to push the boundaries further, advocating a mega-data center that takes advantage of Sewden's climate and modular design. Towards that end, MDC has published a  proposal for a 60 megawatt modular facility.

"We can deploy 100 M1 Modules with 3,500 racks," Karlung said. "It not only looks cooler than the Facebook server farm,  it´s more secure and costs half the price.

"It's just fun to compare the singular server farm with the modular server farm," he added. "It's like a competition, where I look at singular giant farms as dinosaurs."

Karlung is known as the man behind the “James Bond Villain” data center – the former nuclear bunker beneath Stockholm that now houses servers for Swedish ISP Bahnhof. The subterranean lair is outfitted with waterfalls, a greenhouse-style NOC, and a glass-enclosed conference room “floating” above the colocation floor.

MDC Stockholm is run by the entrepreneurs behind Bahnhof, including Karlung and colleague Andreas Norman, and has partnered with several well known Swedish companies. Design services are provided by SplitVision Design, while the server modules will be built with bullet-proof steel from Sweden’s SSAB. The inflatable “command modules” are being created by Lindstrand Technologies, whose founder, Per Lindstrand, is a renowned adventurer.

As hyper-scale data centers for companies like Facebook gain a higher profile, Karlung believes his flair for futuristic visual design can build a distinctive brand.

Design as a Data Center Differentiator

Karling turns to consumer goods for an example. "The Absolut Vodka brand from Sweden has been a success since it made something different - the design of the bottle made the product," he said. "Vodka is vodka. Its all about the bottle design."

"Containers are ugly," he said. "I think design is too often neglected in our field of business." Karlung says that designing sleeker and larger modules can turn around some of the early reservations about containers and modular designs.

How ling would it take to produce the 100 modules for a large data center design? "Here we rely on the partners and production capacity of (Swedish steel company) SSAB," said Karlung. "A batch of 10 modules will take 3 months to produce, so a rollout of 100 modules, and the included equipment and racks could be rolled out in 30 months. And this is a calculation based on the production capacity at this time. Once you fine tune stuff, it will be possible to do stuff much faster."

While Karlung says a modular design could prove cheaper than Facebook's current plans, he says they got the location right. "Ideally a placement near greater Stockholm would be an excellent placement for the 60 MW data center," he said. "The temperature is on average 6 degrees centigrade (42 degrees F), which is warmer than the far north. However, people and business tends to live in urban areas, and if you are going to make a success of a big server farm - you need to balance the demand for cooling, with access to the market and good infrastructure."