Facebook is reducing the number of backup generators by 70 percent at its new data center in Sweden, saying the extraordinary reliability of the regional power grid serving the town of Lulea allows it to rely upon redundant power feeds. 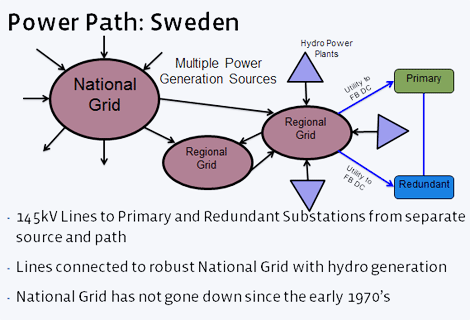 A dagram of the utility archotecture supporting the Facebook data center in lulea, Sweden, which will operate with fewer generators than Facebook's U.S. data centers.

For most data centers, backup generators serve as the last line of defense against downtime during utility power outages. Some major data centers use more than 30 diesel generators to ensure a ready supply of on-site generation.

Facebook is taking a different approach at its new data center in Sweden, reducing the number of backup generators by 70 percent. Facebook says the extraordinary reliability of the regional power grid serving the town of Lulea allows the company to use far fewer generators than in its U.S. facilities.

Using fewer generators reduces the data center's impact on the local environment in several ways. It allows Facebook to store less diesel fuel on site, and reduces emissions from generator testing, which is usually conducted at least once a month.

Despite those benefits, Facebook's approach would likely exceed the comfort level of many data center operators, who design their power systems to be as redundant as possible and see generators as a critical level of protection.

Local officials in Lulea say there has not been a single disruption in the area's high voltage lines since 1979. The city lies along the Lulea River, which hosts several of Sweden’s largest hydro-electric power stations. The power plants along the river generate twice as much electric power as the Hoover Dam.

"There are so many hydro plants connected to the regional grid that generators are unneeded," said Jay Park, Facebook's Director of Datacenter Engineering. "One of the regional grids has multiple hydro power plants."

Park says Facebook has configured its utility substations as a redundant "2N" system, with feeds from independent grids using different routes to the data center. One feed travels underground, while the other uses overhead utility poles.

While many data centers are supported by two power feeds, Facebook says the regional grid in Sweden is more resilient than the U.S. grid because it can tap power from so many sources -including  the national grid, other connected regional grids, and multiple hydro power plants. All of these sources would have to simultaneously fail before the Facebook data center would lose utility power.

Park says Facebook could probably operate entirely without generators in Lulea, but has taken the more cautious approach of installing a reduced number of generators. He emphasized that the reduction in generators is not a network-wide design change for Facebook, but limited to the Lulea facility.

"It's very unique," said Park. "We couldn't do this in the U.S. because the areas we're in don't have multiple generation sources nearby."

Yahoo: Data Centers With No Generators?

Facebook isn't the first major Internet company to look at using fewer generators - or even none at all. Last year Yahoo said it was exploring scenarios in which it would build data centers without generators or UPS, and use its network to route around any power outages that occur at those facilities.

That’s a strategy that only the largest data center providers can contemplate, as it requires multiple data centers in major network capacity. Google has pursued a similar strategy during maintenance on some of its data centers, shifting capacity to other facilities (see How Google Routes Around Outages for details).