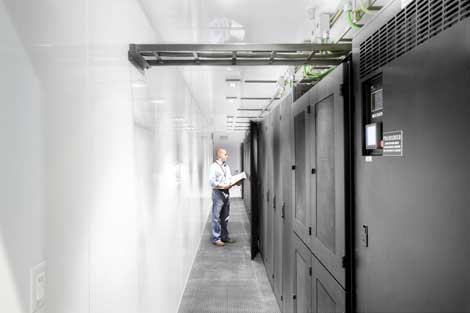 The interior of an IO Anywhere data center module.

Investment management company Allianz Global Investors of America is the financial services firm that has deployed modular data center space at the IO New Jersey data center, the companies said today. The deal, which deployed 3.6 megawatts of IT capacity in just 90 days, was announced in July but the customer was not identified at that time.

The 3.6 MVA IO Anywhere system was manufactured at the IO Factory in Phoenix, Ariz. and delivered to Edison, New Jersey, along with an integrated power delivery system that includes primary and backup power generation, and power conditioning.

In March IO announced plans to transform a former New York Times printing plant in New Jersey into the world’s largest modular data center. The 830,000 square foot building in Edison, N.J. will become the East Coast hub for IO, which is converting the building into a facility to house data center capacity in customized containers. in February the company opened a factory in Phoenix to build its IO Anywhere modules, which will eventually be able to deploy up to 18 megawatts of data center capacity each month.