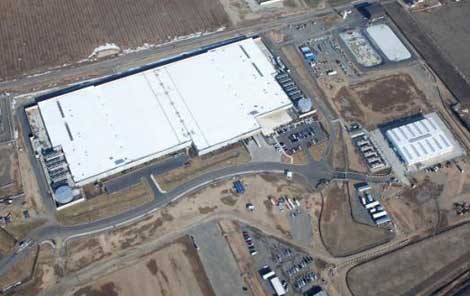 Microsoft's data center design can change significantly from one phase to the next, as seen in this aerial view of Quincy, Washington. The huge building on the left is Phase 1, while the smaller building at lower right is the second phase.

Microsoft says a new design for the second phase of its data center in West Des Moines, Iowa is an evolution of the company's modular data center design, and not spurred by challenges with the first phase of the facility. The nearly complete West Des Moines data center showcases Microsoft's use of factory-built modules to rapidly deploy flexible, highly-efficient IT capacity.

A month ago Microsoft (MSFT) announced an expansion of the $200 million facility to double the size. Local officials told the Des Moines Register that the changes were related to  performance issues with the initial deployment. “I think they’re finding out that the individual units are not working so well in the Iowa humidity,” West Des Moines city planner Lynne Twedt told the city’s plan and zoning commission Wednesday. “They’re going to a different plan of attack with this one.”

Phase 1 of the West Des Moines facility uses modular data center components placed outdoors. Microsoft says its inclusion  of a steel building for the expansion was taken out of context.

"The decision to go with a different type of modular building form factor for Phase 2 has nothing to do with Iowa’s weather," said Microsoft's Christian Belady. "They are new design models that our research and development teams have determined are even more cost effective, efficient, and sustainable for the services we will be deploying from them.

“Our infrastructure designs for our modular facilities, including Phase 1 and Phase 2 in the West Des Moines facility, use outside air with evaporative cooling. They are developed, along with our servers, to address the ambient weather conditions of the regions in which they located."

For some time now, leading players in the data center industry have been designing data centers to incorporate outside air into cooling systems. This process, known as "free cooling," can save hundreds of thousands of dollars in cooling costs by avoiding the need to use refrigeration units (chillers).

Microsoft has been among the leaders in creating modular data centers that incorporate outside air into cooling. The company has used some modules that operate outside, and others that are housed within a a lightweight exterior, which Microsoft  compares to a “tractor shed,” filled with highly-customizable containers packed with servers, storage and power and cooling infrastructure.

“Microsoft’s West Des Moines data center is one of three modular facilities we have announced in the past year, with the others located in Quincy, WA and Boydton, VA," Belady said. "Each of our data centers are evolving ecosystems that need to be flexible enough to quickly meet the demands of our growing customers and the diverse business services we host. Our modular facilities continue to evolve and change as we research and develop new methods to significantly reduce water and energy use, and building costs; while increasing computing capacity and server utilization."

An example of that evolution is seen in Quincy, where Microsoft operates two data centers. The first is a 470,000 square foot facility with concrete walls filled with traditional raised-floor space. Phase II  is a much smaller facility filled with modules. The module design has changed between facilities, evolving from fairly standard containers in Chicago to lightweight aluminum units with louvers built into the side to facilitate airflow for evaporative cooling.

In January of this year Microsoft  completed their modular "cloud farm" data center in Quincy, Washington. The facility is filled with IT-PACs (for pre-assembled components) modules that hold up to 2,000 servers each.  Microsoft recently worked with the city of Quincy to retool the city's water treatment infrastructure to save millions of gallons of potable water for the local community.

Microsoft has not yet offered details on how the design of the second phase in West Des Moines will differ from the first phase, or Microsoft's other modular facilities. In May Belady  told Data Center Knowledge that Microsoft is already developing new facilities optimized for this vision of cloud data centers as “data utilities.”