Will mergers continue to reshape the data center landscape? Investment bankers tracking the industry predict say there are more deals to come, with telecom companies with cloud computing aspiration shaping up as the likely buyers. 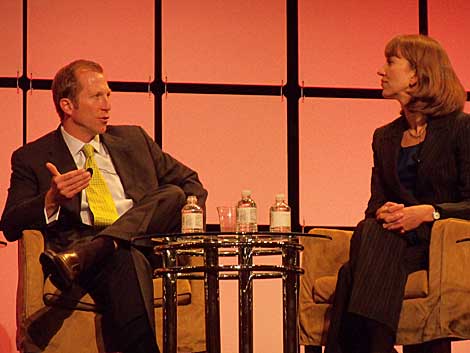 Will mergers continue to reshape the data center landscape? Investment bankers tracking the industry predict say there are more deals to come, with telecom companies targeting the cloud computing market shaping up as the likely buyers. There were mixed opinions about whether colocation and managed hosting firms would continue to fetch premium prices in these deals.

There has been approximately $7.1 billion in deal activity in the data center industry in 2011, according to Tier 1 Research, which held a panel on mergers and acquisitions activity at its Hosting & Cloud Transformation Summit in Las Vegas this week. That's up from $4.8 billion in 2010, but based on a smaller number of acquisitions with higher valuations. That includes blockbuster deals like Verizon's $1.4 billion purchase of Terremark and CenturyLink's $2.5 billion acquisition of Savvis.

"There's been a tremendous amount of consolidation in the last two years," said Doug Webster, Managing Director with Signal Hill. "The good news is that there's still tremendous interest. There doesn't seem to be any loss of appetite for the sector."

"Acquisitions are up because there aren't too many other options for funding," said Kelly Morgan, Senior Equity Analyst at Tier 1 Research. "This is not the best time for an IPO. We saw Telx withdraw theirs," she said noting that Telx was instead acquired by ABRY Partners and Berkshire Partners.

But based on the pricing on some of the acquisitions, the buyers seem pretty motivated as well. Morgan said recent industry deals have seen companies sell for between 8 to 10 times their annual EBITDA (earnings before interest, taxes, depreciation, and amortization), with some outliers approaching 15 times their EBITDA.

Some of the investment bankers noted that deals at these multiples have paid off well for the acquirers. One example is Cincinnati Bell, which bought high-density colo specialist CyrusOne for $525 million in 2010. Colocation revenue from CyrusOne boosted results at Cincinnati Bell in the most recent quarter, prompting a buy recommendation from securities analysts. Cincinnati Bell recently announced plans to build a 1 million square foot CyrusOne data center in Phoenix.

"How many disappointed buyers are there?" asked Mark Thorsheim, Partner and Managing Director of DH Capital. "Just about every deal has produced strong results. We're in a very robust sector. Where else are private equity firms and lenders going to do better? They've really done exceedingly well."

On one point, there was broad agreement: the buyers in this consolidation will be telecom companies seeking to build their cloud computing businesses. "The next two to three years will be dominated by telco activity," said Thorsheim.

Telcos Decide to Buy, Not Build

Tier 1 Research Director Antonio Piraino said telecom companies have been sizing up the cloud computing opportunity for several years, trying to sort out whether it was best to build their own data centers or buy existing providers. "The telcos have recognized that they can't do it themselves," said Piraino. "We believe the telcos have a major role to play."

It remains to be seen whether the innovation and rapid growth seen in cloud-focused managed hosting companies will continue under new ownership. "One can make the argument that telcos aren't that successful getting into new businesses," said John Hendon, Director in the Communications & Media Investment Banking Group at Stifel Nicolaus Weisel. "This is a strategic imperative for these companies."

Who will be bought? Are acquirers more likely to focus on colocation providers who lease raised-floor data center space,  or companies specializing in managed services?

"If you look at managed versus colocation, the colo model is simple," said Thorsheim. "It's less people-intensive, so margins can be in the 50 to 75 percent range." While managed hosting often involves premium pricing, margins are somewhat lower because the provider must acquire and own the server hardware to power the services.

The acquisitions are likely to boost data center construction, according to Hendon. "Look at the amount of funding behind some of these industry leaders," he said. "These sponsors are looking to deploy a large amount of capital."

That trend is likely to boost the amount of data center space in "second tier" markets and smaller cities. "The colocation business is still a fantastic business," said Thorsheim. "Capital is flowing freely supporting that business model. There are still dozens of cities that could see additional capacity.'

The panel also touched on a relatively new wrinkle in data center deals - whether valuations were affected by whether a company owns its data centers or leases space from wholesale providers.

"If you're doing high-end complex hosting with high margins, those leasing costs probably aren't as important," said Webster. "We've seen very successful companies that don't own their facilities. In the retail colo business, it's probably harder to make the margins if you don't own the facility."