Google today announced a major expansion of its Internet infrastructure in Asia, saying it will build new data centers in Singapore, Taiwan and Hong Kong. The company will invest $100 million in each of the facilities. 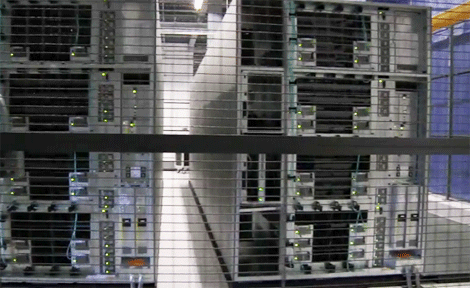 A look at the inside of a Google data center in South Carolina, showing storage container modules. Google said today that it will build three new data centers in Asia.

Google today announced a major expansion of its Internet infrastructure in Asia, saying it will build new data centers in Singapore, Taiwan and Hong Kong. The company will invest $100 million in each of the facilities, which will be Google's first company-built data centers in the Asia-Pacific region.

"More people are coming online every day in Asia than in any other part of the world, so locating data centers here is an important next stage of Google’s investment in the region," Google said in a statement.

Google has purchased land in each location, acquiring 15 hectares (37 acres) in Changhua County in Taiwan, 2.7 hectares in the Kowloon region of Hong Kong, and 2.45 hectares of land in the Jurong West section of Singapore. The data centers will be operational in one to two years, Google said, and will each employ between 5 and 20 employees.

Google has long looked to Asia as perhaps the most important growth market for the Internet. “The Asian population will the dominant user population of the Internet,” said Google Internet evangelist Vint Cerf, who wrote the software that connected the first servers on the Internet, in a 2009 video. “There’s no doubt about that at all.”

Google has announced investments of more than $700 million in undersea cable infrastructure to provide it with faster connectivity between North America and the Asia-Pacific region. In 2008 Google said it would partner with Bharti Airtel, Global Transit, KDDI Corp., Pancet and SingTel on the $300 million Unity Trans-Pacific Cable. In 2009 it announced plans to team with KDDI, Bharti Airtel, Reliance to build a $400 million submarine cable dubbed Southeast Asia Japan Cable (SJC).

The company has been scouting multiple data center locations in Asia since late 2007. The company is said to have looked at potential sites in Taiwan, Malaysia, Japan, South Korea, India and even Vietnam.

Google's site location decisions reflect the prevailing trends in the market, as U.S. data center and cloud computing providers have typically avoided placing data centers in mainland China due to the country's policies regarding content filtering. Over the past year, major providers have accelerated their expansions in the region. Earlier this year Digital Realty Trust built its first major data center in Singapore, not far from the location of the new Google facility, and has since announced expansions in Sydney and Melbourne. Meanwhile, colocation market leader Equinix has expanded in Tokyo, Singapore and Sydney. Yahoo is also building a major data center in Singapore.

Google said its new facilities "will be among the most efficient and environmentally friendly in Asia, subject to the same high technical and environmental standards we use worldwide," said Google.

Google didn't provide details on its efficiency strategies for the region. Data center efficiency can be a challenge in some Asian markets, including Singapore, due to the higher ranges of heat and humidity common to the region, which are not ideal for approaches that rely on the use of outside air (free cooling) to cool servers.