A new Atos data center in Helsinki incorporates sea-water cooling and district heating, building upon a design that Helsinki Energy and IT service provider Academica developed in a cavern underneath Helsinki's historic Uspenski Cathedral. 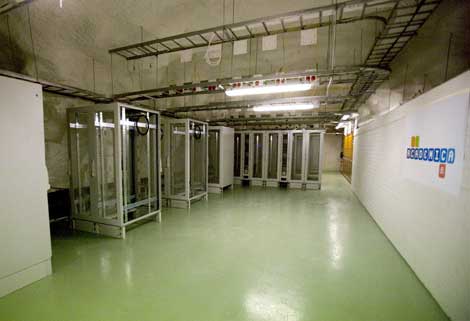 A section of the Academica data center created 30 meters below Uspenski Cathedral in Helsinki. The same design principles are being used in a new, larger Academica facility in a former electric substation.

An innovative data center design in Helsinki that incorporates sea-water cooling and district heating is scaling up and out. Helsinki Energy and IT service provider Academica are building a data center for global IT outsourcer Atos that builds upon a design the two companies developed in a cavern underneath Helsinki's historic Uspenski Cathedral.

The new facility is being built in a former electric substation in the Suvilahti section of Helsinki. At 2,000 square meters (21,500 square feet), the Atos data center will be about 10 times the size of the proof-of-concept project under the cathedral, which was recognized by the Uptime Institute with a Green Enterprise IT award for 2010.

The Atos data center will use cold sea water in its cooling system, while the waste heat produced by the servers is piped via a heat pump into the district heating network to heat Helsinki buildings and the residents’ domestic hot water. When the hall is filled with servers, the waste heat it produces will be enough to heat up to 2,000 single-family houses in Helsinki.

Finland has quickly become the world leader in the use of sea water to cool server farms. In addition to the two projects in Helsinki, the new Google data center in Hamina, Finland uses the sea to replace the chiller in its cooling system, collecting cool water from an inlet pipe located about 7.5 meters beneath the service of the Baltic Sea. The water than travels into the facility through large tunnels carved out of granite, and is used in a water-to-water heat exchanger.

The Academica Suvilahti project was initiated in December 2010 with Siemens IT Services and Solutions as the customer. The Siemens unit has since been acquired by Atos, which is deploying cloud services across a network of 13 data centers around the world.

"This project showcases our method of utilizing the district cooling and heating network in the most optimal way by offering the facilities for eco-efficient use in data centers," says Project Manager Juha Sipilä of Helsingin Energia. "District cooling is the most eco-efficient way of cooling computers, and the heat produced by these computers can, on the other hand, be utilized in the heating of buildings in Helsinki."

“Suvilahti provides an excellent location for eco-efficient computer hall operations,” said Jarmo Tuovinen, CEO of Academica Oy. "There is an abundance of space and smart energy available, and as part of the developing Kalasatama we are honouring green values, for example, with adaptive reuse of the old substation building. We are strategically located in terms of the heating and cooling systems and in the middle of good transport links in the city center."

Suvilahti’s data centre services will be offered to Nordic clients but can also be used by central European companies, according to Jan Kritz, who is responsible for outsourcing services at Atos. Construction at Suvilahti is expected to be completed by the end of this year.

Academica has long-term plans to expand the data center in the former substation to up to 4,000 square meters (43,000 square feet). The high ceilings provide an opportunity for flexible space planning, for example, use of galleries in the location of computers.

The unique designs being created by Academica and Helsingen Energia are enabled by Helsinki's vast network of man-made tunnels and caves that house much of the city's industrial infrastructure, including coal storage and a huge district heating and cooling systems. Earlier this year the Helsinki underground was profiled in a segment on CNN. The Uspenski data center is featured at the 3:30 mark in this video.