https://www.datacenterknowledge.com/sites/datacenterknowledge.com/files/logos/DCK_footer.png
Recent
Recent
Black Hat Asia: Democracy's Survival Depends on Taming Technology
May 16, 2022
NSA Says ‘No Backdoor’ for Spies in New US Encryption Scheme
May 13, 2022
Intel Debuts Data Center Chips Aimed at Fending Off Nvidia, AMD
May 12, 2022
Four Reasons Why AWS Could Lose Its Dominant Cloud Market Share
May 10, 2022
What We've Learned in the 12 Months Since the Colonial Pipeline Attack
May 09, 2022
Featured
Podcast: Can’t Kill the Metal
May 10, 2022
From Energy Star to DEEP: Making Data Centers More Efficient
Apr 14, 2022
Sponsored Content
Three Considerations for Colocation Providers
Sponsored Content
The Shape of the Edge in the Data Center
Design>Hardware 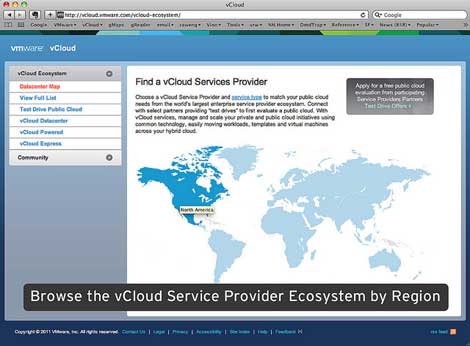 A screen shot of the VMware vCloud Service Provider Locator on the vCloud web site.

“We have standardized on a hybrid cloud model because it is the only approach that provides the flexibility we need and meets strict data location requirements,” said Dr. Stuart Lee, Head of IT for the University of Oxford, UK. “Proven VMware vCloud technology at the University and at VMware vCloud service providers enables us to not only meet changing demands, but also reduce costs and improve data governance.”

vFabric - Database as a Service

Vmware announced a new database provisioning and operations solution designed to deliver a database as a service model for the enterprise. The vFabric Data Director will manage a set of heterogeneous database through policy-based automation, while streaming application development via a self-service provisioning model for developers to rapidly access the database services needed for modern applications. Building a cloud platform for applications VMware has leveraged the Spring community of Java developers and enabled access to VMware infrastructure services, third parties and an Open Platform as a Service (PaaS) framework through Cloud Foundry.

"Making it easier for Tier 3’s Enterprise Cloud customers to manage the complexities of their data is core to our Database as a Service strategy," said Jared Wray, Founder and CTO, Tier 3. "VMware vFabric Data Director overcomes many of the challenges our customers face in moving to self-service databases in the cloud and represents a real step forward in technology that empowers Database as a Service."