IBM lifted the curtain on its Blue Gene/Q SoC last week in Santa Clara and noted that it will soon be installed in two of the most powerful Blue Gene systems ever deployed. 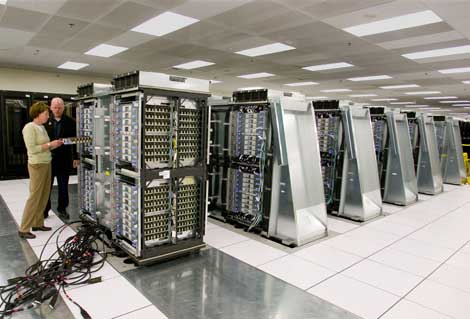 The Dawn supercomputer at Lawrence Livermore National Lab is an IBM Blue Gene/P system that will pave the way for Sequoia, the 20-petaflop Blue Gene/Q system at LLNL.

IBM lifted the curtain on its Blue Gene/Q SoC last week in Santa Clara and noted that it will soon be installed in two of the most powerful Blue Gene systems ever deployed.

With the plug pulled on the 10 petaflop Power7-based Blue Waters for NCSA, IBM is working with two Department of Energy labs for a 10 petaflop 'Mira' system at Argonne National Lab and a 20 petaflop "Sequoia" at Lawrence Livermore. The current top supercomputer in the world, the Japanese K, can sustain 8.162 petaflops.

The Blue Gene/Q will be the first to commercially use transactional memory, which is a way of organizing related tasks into one big job for more efficient processing. IBM will implement transactional memory within the confines of a single chip using a tagging scheme on the chip's level-two cache memory.

IBM Research staff member Philip Heidelberger gave the first keynote on Blue Gene/Q last week at the 19th annual Hot Interconnects Symposium on High Performance Interconnects.  His talk was specifically about the interconnection network and message unit. As explained in his abstract, "the network and the highly parallel message unit, which provides the functionality of a network interface card, are integrated onto the same chip as the processors and cache memory and occupy only 8% of the chip's area, including IO cells."

IBM leads all other vendors with 212 systems in the June 2011 Top500 list of supercomputers. With both Sequoia and Mira systems expected to come online in 2012 the surely be in the top 10 for the Top500 list, and with the efficiency built into the chip they will also be a contender for the Green 500 list for the world's most energy-efficient supercomputers. The Blue Gene/Q prototypes held the top 2 positions in the June 2011 Green 500 list.