The enormous i/o New Jersey data center is the largest example yet of a new approach to IT infrastructure - factory-built modular data centers deployed inside larger structures that provide protection from the elements, along with power and connectivity. 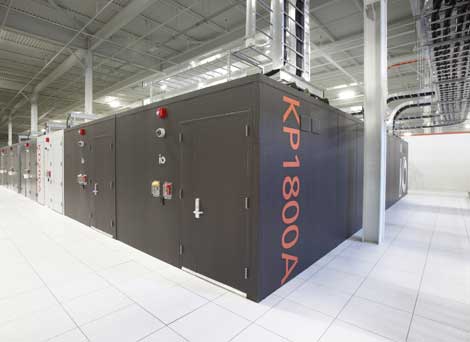 Some of the first modules deployed at the i/o New Jersey data center, including units housing power, networking and IT equipment.

At 800,000 square feet, the i/o New Jersey building is one of the largest data center facilities in the world. It's big enough that the company uses a Zamboni to clean the vast expanses of floor space.

But size isn't the only area where this new facility is pushing boundaries. i/o New Jersey is the largest example yet of a new approach to IT infrastructure, in which factory-built modular data centers are deployed inside larger structures that provide protection from the elements, along with power and connectivity.

Much of the modular story has focused on the enclosures themselves, which started out as ISO-standard shipping containers but have since evolved into custom designs like the i/o Anywhere units.

The Economics of the Facility

But the facilities housing these units are part of the story as well, playing a key role in the economics of the new deployment model. The data center environment is managed within the modules, reducing the cooling infrastructure needed for the larger building, which in turn reduces the up-front capital investment to bring a facility online. An early example of this was Microsoft's lightweight "tractor shed" design for its modular data center in Quincy, Washington, which features a lightweight exterior.

While Microsoft can customize its facility around its own needs, i/o New Jersey is among a small number of modular facilities optimized for multi-tenant operations, which requires a sturdier exterior and extensive security. Other early examples include CapGemini's Merlin data center in the UK, the Pelio & Associates building in Silicon Valley, and a Tier 5 facility in Australia. But none of these projects approach the scale of i/o's data center in Edison, New Jersey.

The huge building is adjacent to Exit 10 of the New Jersey Turnpike, and previously served as a printing plant and distribution hub for The New York Times. The operation was closed in 2008 when the Times reduced the size of its print product and consolidated its printing operations in Queens. i/o acquired the site, which is located next to a large power switching station, and began converting the facility into a modular data center.

One of the promising features of the modular approach is the ability to deploy IT capacity quickly. The first customer installation at i/o New Jersey is already in place, providing 3.6 megawatts of critical power to a large global financial services company. The customer was fully installed within 90 days of i/o occupying the building, a  timetable enabled by simpler approach to the building superstructure, which requires less construction.

Highway access is important to allow delivery of the i/o Anywhere modules, which are built in the company’s factory in Phoenix and then loaded onto trucks for the cross-country journey to New Jersey. The 25-ton modules enter the building through a 20-by-20 foot entrance, and then are wheeled into position within the data center.

The modules are arranged in groupings, typically featuring four to five enclosures (including units housing power, networking and IT equipment). The 43-foot long modules are deployed alongside a raised floor. In a traditional data center, the raised floor serves as a cooling plenum, but at i/o New Jersey, the cooling system is housed in a four-foot high compartment in the lower section of each modular unit. The  four-foot high exterior raised floor provides customer access, aligning with the entrance to the module - and also providing a familiar visual environment for those accustomed to traditional raised-floor data centers.

i/o is building out the enormous Edison site in four phases.  The first of four meet-me-rooms is in place, with 48 four-inch conduits providing fiber access to providers including AboveNet, Level 3, Verizon and Optimum Lightpath, with AT&T being added shortly. The fiber and power cabling is distributed via an overhead "superhighway" of ladder-style trays.

For i/o, the new facility represents a big bet that data centers will be built and deployed very differently in the future. "We believe we're on the front edge of a megatrend," said Anthony D’Ambrosi, Chief Sales & Marketing Officer for i/o. "We think of it as a refresh of the data center strategy."

The Edison site represents i/o's entry into New Jersey, a highly competitive market with plenty of existing providers offering retail colocation services or wholesale data center space. Area real estate professionals say its not clear whether modular offerings will impact demand for the wholesale or colo market, but see them as part of an expanding range of options for enterprise data center customers.

CEO George Slessman says the modular approach provides i/o with different economics than its competitors. “New Jersey is already successful for us,” Slessman recently told Data Center Knowledge. “My investment is incremental. I’ve already covered my fixed costs, and I only build if I have a customer."

One thing's for sure: i/o has plenty of capacity in the Edison facility, which could house as many as 650 of the i/o Anywhere modules. The company's factory in Phoenix is expected to produce 120 modules this year, some of which will be deployed in Edison, with others going to customer sites or the second phase of the i/o Phoenix data center. 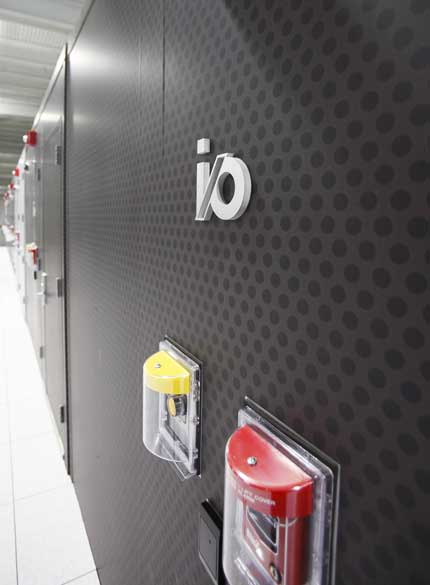 A close-up of one of the i/o power modules, with emergency power off switches on the outside of the enclosure.