What happens in Vegas, stays in Vegas. Unless it's 15,000 network geeks loose at Cisco Live! 2011 - in which case, what happens in Vegas proliferates on Twitter, Facebook, LinkedIn and blogs. Here's are some highlights and links from the event. 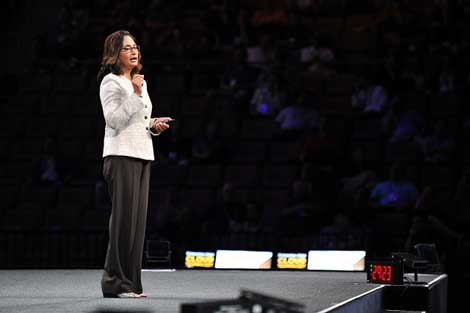 Cisco CTO Padmasree Warrior addresses the audience during her keynote at Cisco Live 2011.

Cisco (CSCO) started off the week revitalizing its workhorse switch family with updates to the Catalyst 6500.

There was no sign of the Cisco modular data centers, but the Cisco Network Emergency Response Vehicle (NERV) was on the expo floor for a tour. NERV is a self-deployable command and communications resource for first responders, critical infrastructure, and other organizations that have been affected by a catastrophic event and require mission-critical networking to recover normal operations. It meets or exceeds the National Incident Management System (NIMS) standards for type II mobile communication centers.

During the week there several other related news stories about Cisco: