Chambers: Cisco Continues to Reinvent Itself 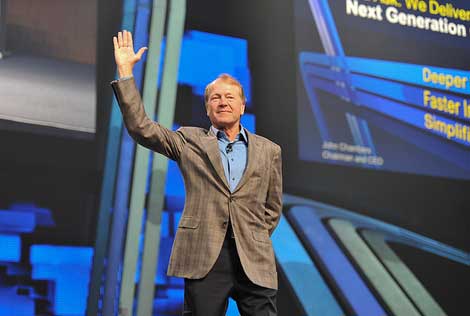 Cisco Systems has wrapped up its Cisco Live! 2011 conference, which brought together 15,000 people in Las Vegas (and more than 40,000 total when the virtual audience is factored in) and a "flash mob" to open the keynote.

Cisco CEO John Chambers took to the stage Tuesday for the conference keynote.  Many people talk about Apple's Steve Jobs and his presentations, but Chambers is also a master of engaging his audience.

Chambers emphasized the company's five priorities -- the core, collaboration, data center/virtualization/cloud computing, video and architectures.  He said Cisco's leadership in the core (switching, routing,services, security and mobility) will drive the innovation in architectures and be its strategic advantage over the competitors who present only one product at a time instead of the complete architecture. Taking aim at Hewlett Packard, he said that Cisco will spend $5.3 billion on research and development, almost double that of HP.

In May, Cisco realigned and streamlined much of its business in attempt to improve performance and accountability. "We are continuing to reinvent ourselves", said Chambers. He mentioned several times that the company needs to be "easier to work with" and have a renewed focus on the customer where "you ask, we deliver." (Cisco CTO Padmasree Warrior continued the focus on accountability in her Wednesday keynote.)

A continued focus on innovation will drive the second and third priorities where collaboration drives productivity and data center / virtualization / cloud technologies are the most network-centric architecture. Chambers focused quite a bit on video and explained how Cisco is poised to take full advantage of these exploding technologies, where 91 percent of all Internet traffic in 2014 is expected to be video. He continued by saying that video will be the new platform for communication and IT.

The four megatrends that Cisco believes will form the way everyone works are: mobile, social, video and virtual.  Returning to the focus on Cisco's complete architecture approach, Chambers explained that Cisco has the complete stack of services in their Medianet solution to power the video platform. Security was not left out by any means, as he explained that this is top-of-mind for Cisco and a number one priority (and challenge).

Summarizing where Cisco will be in two to three years, Chambers said that the company will continue to be the leader in the intelligent network, will be faster on innovation, have a simplified decision process internally, be leaner and more focused, and will be a trusted networking, IT and business partner.