The two supercomputers at Los Alamos National Laboratory have been taken offline as a precaution as emergency teams seek to protect the lab from a wildfire that has consumed more than 60,000 acres of land on two sides of the property. 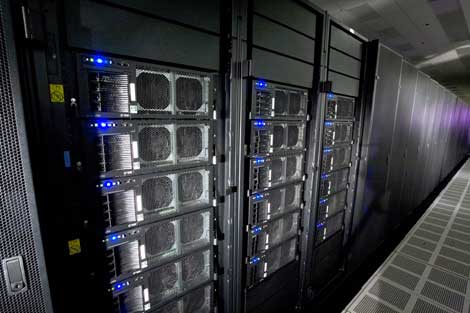 The Roadrunner system is one of two leading supercomputers housed at the Loa Alamos National Laboratory, which is being threatened by a large wildfire. The supercomputers have been taken offline as a precaution.

The wildfire threatening Los Alamos, New Mexico has gained national attention, largely due to concerns about the safety of nuclear waste at Los Alamos National Labs, which played a key role in the Manhattan Project and nuclear weapons development and testing. As we noted Monday, the Department of Energy facility also houses two of the world’s leading supercomputers, the Cielo and Roadrunner systems. Those systems have been taken offline, Computerworld reports.

"A Los Alamos spokeswoman said the laboratory conducted an 'orderly shutdown' of two of its largest supercomputers," writes Patrick Thibodeau at ComputerWorld. "IBM's Roadrunner, the first the break the petaflop barrier in 2008, and now the 10th ranked most powerful supercomputer in the world, and Cielo, a Craig system that is ranked No. 6 on the Top500 list. The supercomputer shutdowns were conducted 'early on,' but an exact day or reason for the action wasn't clear."

A likely concern is that smoke from the wildfires could cause problems for the ventilation and cooling systems supporting the supercomputers and the labs' other high-performance computing infrastructure. The Las Conchas Fire has consumed more than 60,000 acres on two sides of the LANL site, and emergency and fire crews are setting back burns to try and prevent the fire from threatening the laboratory.