London-based Romonet uses design documents for a data center to build a simulation of how the facility will operate. The company's data center prediction modeling tool, Prognose, makes its U.S. marketing debut today. 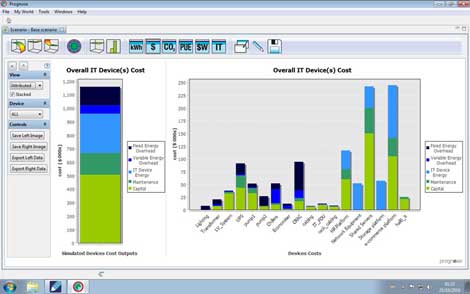 Is the key to data center optimization found in blueprints or airflow monitoring? While many data center tools focus on the use of thermal sensors and computational fluid dynamics (CFDS) software to create 3D airflow models, a new entry into the U.S. market takes a different approach.

London-based Romonet uses design and engineering documents for a data center to build a simulation of how the facility will operate. Because its Prognose software creates its models from engineering documents, Romonet says it can provide a detailed operational analysis without the need for thermal sensors, airflow monitoring or any agents - which also allows it to analyze a working facility without impacting its operations.

After introducing Prognose in the UK market last year, Romonet is now launching its entry into the U.S. market with an announcement at the DataCenterDynamics event in San Francisco.The company was founded by CEO Zahl Limbuwala (who is familiar to many in the industry from his role as Chairman of the BCS Data Centre Specialist Group) and Chief Technical Officer Liam Newcombe, who explains Romonet's approach.

"We take the electrical and mechanical layouts and we build a very simplified model of the site," said Newcombe. "We can then sort out what it's sensitive to - which tells you where to focus and where to get data and optimize the site."

"Rather than taking a metering or monitoring approach, we took a modeling approach," Limbuwala added. "We created a model to understand the engineering aspects of the data center. We can work from live line drawings or designs. We have partners using it to design or redesign the data center and some who use it in operations."

Prognose figures to be a player in the growing field for data center infrastructure management (DCIM) tools. Limbuwala says that most DCIM software can provide data about current and past performance, while Prognose is more forward-looking.

"We actually believe we are in a new category that we call data center prediction modeling," said Limbuwala. "We are different to every other player in that category now what we do doesn't need the data center to exist. Our software doesn't touch the data center in any way. We're very much a modeling approach, as opposed to a management approach."

Can Designs Forecast the Future?

But can design and engineering documents tell the full story of how a data center will operate? Newcombe says these blueprints are reliable enough to build a predictive model, but have enough gaps that the additional modeling Prognose can avoid surprises.

"We've modeled quite a few data centers," said Newcombe. "If their behavior wasn't predictable, they would fail quite spectacularly. But we've never modeled a data center that works exactly the way the operators thought it did. We found a divergence between how the model says it should behave and how it actually behaves."'

A key feature of Prognose is dashboards that break out costs for specific components of the data center. Translating operational performance into cost is one of the vexing challenges for many data center operators, Limbuwala said.

Romonet will sell its product via direct sales to large providers, but will also work with partners, including construction firm Skanska and engineering specialist Syska Hennessy.