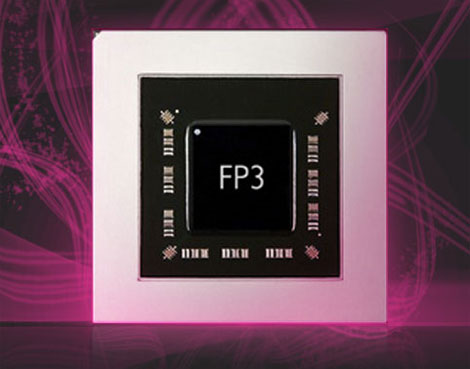 On Tuesday Alcatel-Lucent (ALU) announced a new network processor that delivers a fourfold increase in performance over the fastest Internet Protocol (IP) networks available today. By supporting 400 Gigabits-per-second (Gbps) transmission speeds, the new FP3 processor opens up new possibilities for bandwidth-intensive services, applications and content, while cutting power consumption by up to 50 percent.

As other vendors are getting to the 100 Gbps mark, the FP3 processor is 40 nanometer and contains 288 RISC cores, supporting 400 Gigabits per second transmission speeds. FP3 based line cards for the Alcatel-Lucent 7750 Service Router will be commercially available in 2-port 100GE, 6-port 40GE, and 20-port 10GE configurations in 2012.

As a part of the company's High Leverage Network (HLN) vision for addressing demand for broadband capacity and services, the FP3 represents their new generation of IP routing technology.  As an example of the 400 Gbps speed, a single FP3 processor could handle 70,000 simultaneous High Definition video streams or 8.4 million simultaneous retail cloud sessions. The flexibility of the FP3 design can be seen in the ability to support dynamic assignment of queues and resources across ports.

"This technology puts us a generation ahead of today’s fastest IP core routers," said Alwan. "And, it’s not just moving bits, but generating revenue and creating value for service providers and their business, residential and mobile customers. By making networks faster, smarter and more environmentally sustainable, Alcatel-Lucent is enabling the continuous innovation of consumer and business devices, content and applications that increasingly depend on service provider networks."

With video growth on the Internet and the needs of the data center, the 7750 Service Router with a FP3 processor will address routing speed and intelligence for data center interconnects. Alcatel-Lucent's strategic investment cycle builds momentum for the 400 Gbps Ethernet and the next likely level for 1 Tbps Ethernet. The FP3 chipset enables high-density 10GigE, 40 GigE and 100 GigE interfaces with a clear path to 400 GigE interfaces. New service routers with the FP3 chip will be backwards compatible and product possibilities for Alcatel-Lucent can combine different configurations utilizing the full 400 Gbps of the FP3.

Several telecom vendors including BT, NTT and Verizon welcomed the Alcatel-Lucent's announcement and the potential of the technology. "Verizon continues to enhance the FiOS and wireless data broadband access capabilities for our customers and we have worked with Alcatel-Lucent to deploy next generation Ethernet and MPLS metro technology," said Ihab Tarazi, Vice President Global Network Planning of Verizon. "In March of this year, Verizon led the industry with a 100G Ethernet field trial based on Alcatel-Lucent’s service router technology with its 100G FP2 silicon engine. We are excited to work with Alcatel-Lucent and continue to push the industry in technological innovation to support the significant growth of access data traffic."

Alcatel-Lucent has demonstrated the FP3 chip in the lab today and line cards with the new FP3 chip are expected to ship commercially by mid-2012.