The "K" supercomputer, a joint project by Fujitsu and the RIKEN center, has overtaken China's Tianhe-1A system to gain the top spot on the updated list of the most powerful supercomputers. Here's a closer look at the 9.9 megawatt system. 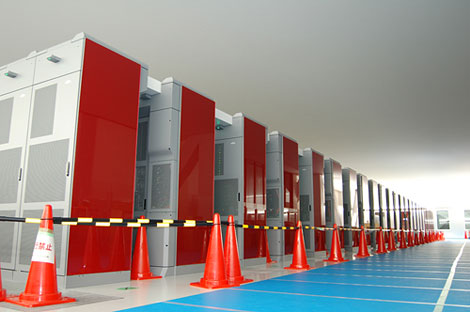 A look at some of the 672 cabinets housing the K supercomputer from Japan, the new leader in the Top 500 raking of the most powerful supercomputers (Credit: RIKEN)

A new system from Japan has extended the frontier of supercomputing power, grabbing the top spot in the Top 500 ranking in the process. The "K" supercomputer, a joint project by Fujitsu and the RIKEN center, has overtaken China's Tianhe-1A system to gain the top spot on the updated list of the most powerful supercomputers, which was released this morning at the International Supercomputing Conference (ISC 11) in Hamburg, Germany.

The K computer system, currently in the configuration stage, features 68,544 Sparc 64 CPUs, each with eight cores, for a total of 548,352 cores—almost twice as many as any other system in the TOP500. The K Computer is also more powerful than the next five systems on the list combined. The system is deployed across 672 computer racks and has a power consumption of 9.89 megawatts.

The system achieved a LINPACK benchmark performance of 8.162 petaflops (quadrillion floating-point operations per second), to easily eclipse  Tianhe-1A with a performance at 2.6 petaflop/s. Placing third overall was Jaguar, a Cray supercomputer at the U.S. Department of Energy’s Oak Ridge National Laboratory, with 1.75 petaflop/s.

Joint Effort by RIKEN, Fujitsu
RIKEN and Fujitsu have been working together to develop the K computer, which is scheduled to begin shared use by November 2012, as a part of the High-Performance Computing Infrastructure (HPCI) initiative led by Japan's Ministry of Education, Culture, Sports, Science and Technology. The K computer is expected to have a groundbreaking impact in fields ranging from global climate research and meteorology to disaster prevention and medicine.

Executives at RIKEN (Advanced Institute for Computational Science) and Fujitsu cited the Top 500 ranking as a sign of Japan's determination to recover from the devastating earthquake and tsunami in March.

"I am delighted that we were able to achieve this result, made possible through the tremendous efforts of all involved, despite the impact of the Great East Japan Earthquake," said Michiyoshi Mazuka, Chairman and Representative Director, Fujitsu Limited. "In particular, I am sincerely grateful to our partners in the Tohoku region for their commitment to delivering a steady supply of components, even though they themselves were affected by the disaster."

"I would like to express my deep gratitude to everyone, beginning with our colleagues at our development partner Fujitsu Limited, who worked so valiantly on the construction of the K computer even under the severe conditions following the Great East Japan Earthquake," said Ryoji Noyori, President, RIKEN. "It is wonderful to be able to share the joy of this moment with them. I very much believe that the strength and perseverance that was demonstrated during this project will also make possible the recovery of the devastated Tohoku region."

Here are some additional views of the K Supercomputer, supplied by RIKEN:

This view shows the huge assembly of 672 racks supporting the K computer. RIKEN says the system will eventually include 800 racks and reach a LINPACK benchmark of 10 petaflops. 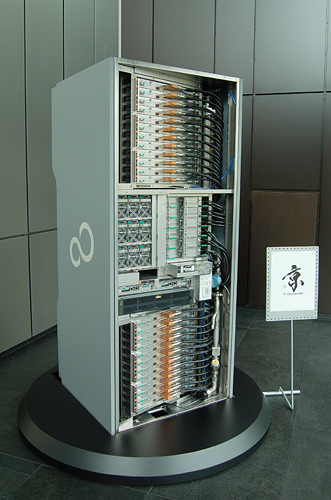 A K computer rack on display at RIKEN.