Federal CIO Vivek Kundra, who has spearheaded the Obama administration's effort to consolidate data centers and shift to a cloud delivery model, is leaving his post to accept a fellowship at Harvard University, the White House said today. 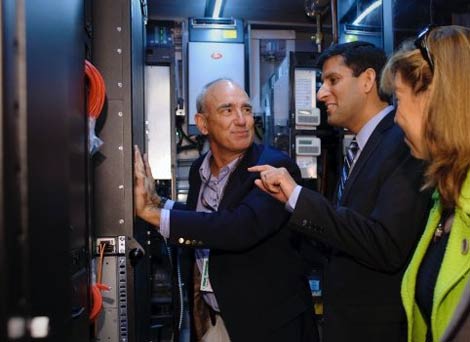 Federal CIO Vivek Kundra, who has spearheaded the Obama administration's effort to consolidate data centers and shift to a cloud delivery model, is leaving his post to accept a fellowship at Harvard University, the White House said today. Kundra will be a joint fellow at the Kennedy School and the Berkman Center for Internet and Society.

One of Kundra's key tasks as CIO was to launch a massive consolidation that will eventually shutter about 800 of the federal government's 2,094 data centers. Kundra cites the huge number of data centers as the leading sign of inefficiency and duplication in the government's IT operations. The effort is expected to close 137 data centers in 2011, with their workloads shifted to more efficient data centers or cloud computing platforms.

Kundra has been a leading advocate of shifting federal IT web sites and applications to a cloud computing model, shifting workloads to third-party data centers. It's not immediately clear who will pick up that mission, but the administration said Kundra's departure would not alter its focus on consolidation and cloud adoption.

"We are planning for a smooth transition, continuing these remarkable gains in changing the way the Federal government manages IT," said Jack Lew, Director of the Office of Management and Budget (OMB). "Vivek’s impact on cutting waste and making government work better for the American people will continue to be felt well beyond his departure from Federal service."

Lew said that Kundra "cracked down on wasteful IT spending, saved $3 billion in taxpayer dollars; moved the government to the cloud; strengthened the cybersecurity posture of the nation while making it more open, transparent, and participatory."

Kundra made it clear that one of the goals of the governments’ impending data center consolidation effort was to identify projects that can run in the cloud “instead of just webifying our brick and mortar institutions.”

Kundra was the nation's first federal Chief Information Officer, a post created by the Obama administration. Kundra previously served as the Chief Technology Officer (CTO) for the District of Columbia, and Assistant Secretary of Commerce and Technology for the Commonwealth of Virginia. He holds an MS degree in Information Technology from the University of Maryland.