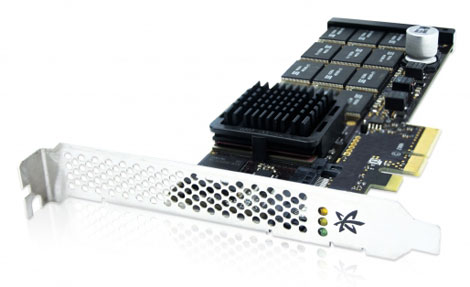 A view of an ioDrive from SSD flash memory specialist Fusion-io, which will have its IPO today.

The technology sector continues to blow by other industries as the money keeps flowing in and Initial Public Offerings (IPO) from tech companies are faring well. Today's scheduled IPO for Fusion-io is just one major event in a busy week for financings. Here's a roundup:

On Wednesday Fusion-IO (FIO) announced the pricing of its initial public offering of 12.3 million shares of common stock  at $19.00 per share. Shares will begin trading on the New York Stock Exchange today (Thursday June 9th). A total of 10,755,607 shares will be offered Thursday.  Fusion-io makes flash-based storage that plugs into a PCIexpress slot on a server motherboard and offers performance advantages over disk-based storage.

Another player n the flash memory sector, Violin Memory, announced a $40 million Series C funding round which includes existing strategic investors and new cross-over public market investors. This comes just months after the company raised $35 million in Series B funding. Violin Memory appears to be benefiting from the market momentum from Fusion-io's pending IPO, EMC's plan to accelerate flash storage adoption and Oracle's TPC-C flash based world record. "Our new capital will allow us to speed up product development and global expansion in Europe and Asia to surpass $100 million in revenue this year, the first step in building a billion dollar company," said Don Basile, current CEO and former chairman and CEO of Fusion-io.  "This pace of revenue growth will continue to make Violin the fastest growing storage company in the last decade."

Cloud-based WAN optimization and application acceleration solution provider Aryaka announced an oversubscribed $15 million Series B round of funding, led by Nexus Venture Partners with participation from Trinity Ventures and Mohr Davidow Ventures. Aryaka will use the additional funds to further accelerate adoption of its SaaS model for data transfer and application delivery in the lucrative midmarket. “This round will be used to fuel our sales and marketing growth and to push into growth markets in Asia and Europe,” said Ajit Gupta, founder and CEO of Aryaka. “The Aryaka network is fully operational, our new Emergencestrategic alliance program is gaining more partners every day and our customer base is rapidly growing as more enterprises migrate to cloud-based services to drive their business.”

Sun Microsystems co-founder Scott McNealy has raised close to $6.4 million in financing for one of his new ventures, stealth start-up WayIn. It looks like McNealy has brought along some old Sun colleagues, as Damien Eastwood, former VP of Legal at Sun, Bill MacGowan, former Chief Human Resources Officer at Sun and others were listed on the SEC filing. People are encouraged to follow Scott McNealy's twitter account for updates related to the company.

Intel (INTC) unveiled more than 35 innovative research projects underway at Intel Labs that will help transform the future of technology. Intel's CTO Justin Rattner announced the latest Intel Science Technology Center (ISTC), a new collaborative framework for security research between Intel and several leading universities. The center represents the next $15 million installment of Intel's recently announced 5-year, $100 million ISTC program to increase university research and accelerate innovation. "The co-principal investigators from Intel and UC Berkeley will lead a talented team of researchers from across the country to address today's most challenging problems in computer security," said Rattner. "Forming a multidisciplinary community of Intel, faculty and graduate student researchers will lead to fundamental breakthroughs in one of the most difficult and vexing areas of computing technology."

Seeking Alpha notes many of the IPO trends in technology with online coupon distributor Groupon.com filing for an IPO on June 2nd to raise $750 million. The rumormill continues with talk of both Zynga and Facebook to IPO sometime in the future. LinkedIn (LNKD) gained 109.4% on their opening day, reaching a high of $122.70 per share.