Using data collected from the company’s data centers and cloud platforms, Microsoft has restructured its cloud infrastructure accounting system to provide each of its internal cloud services’ business units with granular data about the cost of their IT operations. 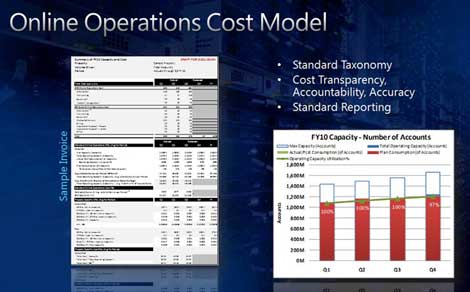 REDMOND, Wash. - When you think of key drivers in the growth of cloud computing, you may not think of accounting. But at some companies, the accounting team is emerging as a key player in documenting the benefits of the cloud financial model, using data to build a compelling business case for broader adoption of cloud technologies.

One example is Microsoft, which has implemented detailed tracking of the cost of IT operations for its more than 200 online services. Using data collected from the company’s data centers and cloud platforms, Microsoft has restructured its cloud infrastructure accounting system to provide each of its internal cloud services’ business units with granular data about the cost of their IT operations.

This provides Microsoft product teams with a detailed analysis of the cost and performance of their cloud applications in different production environments – including third-party data centers, in-house data centers, and the company’s Azure cloud computing platform.

That knowledge is reshaping budgets within Microsoft, providing app developers with the opportunity to shift workloads to more cost-effective cloud environments, and then use the savings to invest in other facets of their operations.

"We are measuring lots of different things, and those signals give us lots of opportunities," said Charlie McNerney, the General Manager of Business Management for Microsoft’s Global Foundation Services, who has led Microsoft’s efforts to overhaul how it accounts for IT operations. "When you can publish data and compare the productivity of different apps. It allows you to forecast in a much different way."

Optimizing for a New Paradigm

As awareness and accountability improve, the data has driven a company-wide effort to optimize IT operations – a key goal as Microsoft’s revenue base gradually expands from boxed software to its new online services.

"It'll move a ton of behavior in ways most companies may not realize was possible," said McNerney. "When you can understand your current costs in this new cloud model, you soon realize the opportunity. Cloud computing enables you to completely reshape the economics of the total cost of IT and deliver significant financial savings. There's so much more efficiency compared to running your own instance. There's a much better rate possible in the cloud than at third-party providers or in-house."

Thus, a metrics-driven push for efficiency that began in the company’s data centers is now permeating a much broader swath of teams developing online services.

A critical first step was the instrumentation of Microsoft’s data centers, which are equipped with sensors that monitor power usage at all levels of their operations. GFS has been tracking energy usage for several years, using the data to track costs. The data also helps define potential savings from design improvements Microsoft has implemented, including its IT-PAC modular data centers, which can run higher-density racks while dramatically slashing the power required to cool servers.

This data provided the tools for Microsoft’s accounting team to transform how it tracks and reports spending at its online services’ and business units.

McNerney and his team set out to provide a different view of IT spending. Many companies and government agencies use traditional accounting models that measure IT spending by the number of employees in an IT department to determine the “cost per head.” The goal is to arrive at a cost of goods sold (COGs), which helps the company understand how much it is making on each sale.

The drawback of a cost-per-head approach is that it provides limited insight into differences in the efficiency of IT operations across the entire spectrum of hardware and software that powers them.

Rate-Based Tracking vs Cost Per Head

McNerney and his team opted for a rate-based approach. They worked to determine a rate for several areas of Microsoft’s IT infrastructure, including data centers, networks, and other rates for IT. These rates can then be applied to the data on usage of compute capacity, network usage and support tickets for each department running an online service.

This provides a clearer picture of which apps make the most efficient use of servers and bandwidth, and which apps trigger a greater volume of compute energy and/or support incidents.

"The bill of IT comes every month, itemized by types of assets used," said McNerney. "Each team can review the bill and then identify areas to address."

This provides an incentive for business units to optimize their apps, as well as the data to help predict cost and usage patterns going forward. This information provides benchmarks to help developers make their apps more efficient – and thus cheaper to operate.

"The only way to get that behavioral shift is to demonstrate it by data and make it visible," said McNerney. "Low utilization rates now get noticed. In their planning sessions, business units look at unit volume, design a better network, more efficient applications, and lower their incident rates. That's been an interesting process."

"I'm looking at every way possible to get the rate down. We think in terms of kilowatts, because that's a big driver," said McNerney. "Once that's mapped, the product teams can look at programming models. You now have a competitive planning analysis. Our focus on rates has been enabled by the cloud. Do you know what you're paying now? What factors into the rate?"

One issue is that all data centers aren’t identical. Their efficiency may vary based upon their design. For example, the local power rates’ for Apps that run in Microsoft’s newest modular data center in Quincy, Washington will be more efficient in their use of power than older data centers elsewhere.

Allowing business units to try and match apps to the most efficient infrastructure could create capacity challenges, so Microsoft has established regional rates for groups of data centers.

"The technology is compelling, and Azure is now a compelling offer for our customers and our internal teams," said McNerney. “The cloud is an answer for a whole bunch of business challenges.”