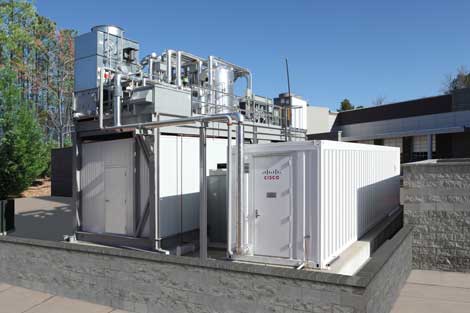 A Cisco Containerized Data Center (right) sits on a pad at a Cisco facility in Research Triangle Park in North Carolina. An infrastructure support module is on the left.

Citing growing interest in modular designs, Cisco Systems is making a major push into the market for data center containers. After months of quietly selling custom solutions, the networking giant today launched the Cisco Containerized Data Center, which it says will meet two key requirements for enterprise and government customers - energy efficiency and faster deployment of IT capacity.

"We are seeing a pretty widespread interest in modular deployment," said Brian Koblenz, the Chief Technical Officer for Modular Data Centers at Cisco. "Part of that is due to capital budgets being slashed and customers will wanting to me more adept. The market is still evolving, growing and maturing."

40-foot Container, Up to 16 Racks
Cisco's 40-foot container features a chilled water cooling system that uses cabinet-level airflow containment rather than a hot aisle/cold aisle design. The modules can house up to 16 cabinets with a height of 44 rack units each, with access doors at each end of each container, a design that allows the containers to either be stacked or deployed alongside one another.

The containers offers a new form factor for delivery of Cisco's Unified Computing System (UCS), which features Cisco networking gear and servers. But the company says its Containerized Data Center will also support third-party equipment. Cisco is working with industry partners including NetApp, EMC, VMware, while Johnson Controls will provide support on integration and deployment. Cisco says it will also work with providers of containerized power and cooling solutions for customers that need additional power capacity. The Cisco container will feature the Cisco Data Center Operations 360 management system, which offers IT capacity planning, real-time monitoring, historical reporting and trending, space and environmental analytics.

The modules can be deployed outdoors, and are expected to operate with a Power Usage Effectiveness (PUE) rating of about 1.25, said Keith Siracuse, a Product Marketing Engineer for Cisco. He said the Cisco containers can be deployed in as little as 12 weeks from a customer order, including testing and shipping.

Speed to Market Driving Interest in Modular Deployment
"The reason why a lot of our customers are moving to a modular approach is timing," said Siracuse. " It's quick, and it provides energy efficiency, and the PUE of about 1.25 is attractive. The cost of building a new data center is very expensive, and the process can take as much as two years. We wanted to have a modular approach moving forward."

Cisco's decision to productize its data center offering follows an extended period of working with customers on container deployments. In December 2009 Cisco helped NASA deploy a container to house its Nebula cloud computing platform at the NASA Ames Research Center in Mountain View, Calif. By early 2010 there were reports that Cisco was actively developing its own container, with the U.S. government as an anchor customer.

The Cisco container debuts at a time when a growing variety of industry players are marketing modular solutions, including vendors of server and electrical equipment, system integrators, and colocation providers. As a result, the recent products offer more diverse features, including air cooling and a variety of capacities and designs.

One of the interesting features of the Cisco Containerized Data Center is its use of enclosures with a contained cooling loop, featuring a cooling coil in the bottom of the cabinet. Three large fans in the rear of the unit direct the airflow through the servers and back to the cooling unit. Here's a Cisco diagram depicting the airflow (click image for a larger version). 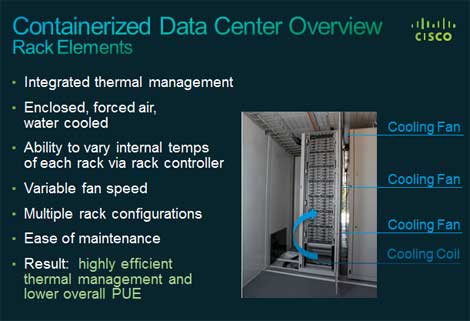