Google has agreed to buy electricity from a wind generation facility in Oklahoma, boosting the use of renewable power on the electric grid that will power its new data center in Mayes County, Oklahoma, the company said today.

Google has agreed to buy electricity from a wind generation facility in Oklahoma, boosting the use of renewable power on the electric grid that will power its new data center in Mayes County, Oklahoma, the company said today. The company has bought all of the 100 megawatts of wind energy production from NextEra Energy Resources in Minco, Oklahoma.

Google can't directly use the wind power generated in Minco in the data center it is building in Pryor, Oklahoma, about 180 miles away. But the power purchase offsets the impact of the Google data center on the local power grid - effectively substituting a megawatt of renewable energy for each megawatt Google draws from the grid to power its data center.

The purchase is similar in size and structure to the agreement Google signed last July with NextEra for wind energy in Iowa. Under terms of the 20-year deal, Google Energy will purchase 100.8 megawatts of power capacity from Next Era’s Minco II facility, which Google will then resell to the power grid through the regional spot market, taking advantage of its new status as an energy trading company. The agreement is exactly the kind of deal described by Google energy czar Bill Weihl in an April presentation, in which he noted that these deals may not provide renewable energy for Google data centers in the short run, but could lay the groundwork for a future transition.

"We select a project that is on the same power grid as one of our data center facilities so that the power generated by the project could conceivably be
used by our data center," Google said in a white paper (PDF) on its wind power purchase agreements (PPAs). "Even if we can’t legally or physically transfer the power to our facility, being in the same power market ensures we are contributing to greening the grid where we operate. For example, under our first PPA with NextEra, we contracted to buy 114 megawatts of wind power for 20 years from a project in Ames, Iowa that we “use” to power a data center in Council Bluffs, Iowa. With our subsequent and latest PPA in Oklahoma, we are adding another we are adding another 100.8 MW of wind power that we similarly use at our data center in Mayes County, Oklahoma."

Power Can't be Directed to a Specific User

The agreements highlight a challenge in using renewable energy in data centers. "We know from Kirchoff’s circuit laws that electricity generated in one
spot cannot be directed to a specific user over the electricity grid," Google notes in its white paper. "Once you put electricity on the grid there is no actual way to say 'the energy from wind farm X is going to my data center Y.' ... While we know from physics that on a pooled electricity grid we can’t tell if energy came from
a “green” or “brown” source, people do indeed claim to use electricity from a specific project at specific location."

For Google, that means using the power markets and its bulk purchases to stimulate additional generation of renewable energy and offset the impact of its facilities on the local utility grid. Here's a graphic from the report that illustrates how Google's approach works. Click on the image for a larger version. 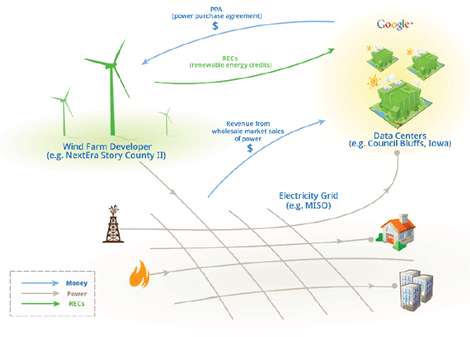