Google invested $890 million in its data center infrastructure in the first three months of 2011, the second-highest total in its history, the company said Thursday in its latest quarterly report.

Google invested $890 million in its data center infrastructure in the first three months of 2011, the second-highest total in its history, the company said Thursday in its latest quarterly report. In fact, it's Google's biggest capital expenditure (CapEx) spending for any quarter in which it hasn't bought one of New York's largest buildings.

Google spent a record $2.55 billion on CapEx in the fourth quarter of 2010, most of it related to the purchase of 111 8th Avenue, a 2.9 million square foot building in New York that is one of the city's premier Internet and telecom hubs. It also serves as the main New York office for Google, which has about 2,000 employees on site.

Google's data center spending in the first quarter was slightly more than Q1 2008 when it spent $842 million on four active data center projects under construction in the United States. Here's a look at the company's recent spending trend: 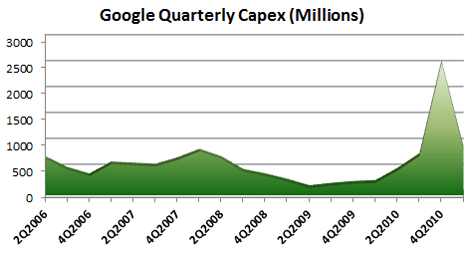 Where is the first quarter's $890 million in data center spending going? In recent months the company has resumed construction on a data center in Oklahoma and begun second phases at existing data center campuses in North Carolina and South Carolina. Google is also building a facility in Hamina, Finland.