In a deal combining two operators of major Internet backbones, Level 3 Communications, Inc. will acquire Global Crossing for approximately $3 billion in an all-stock deal, the companies said this morning. 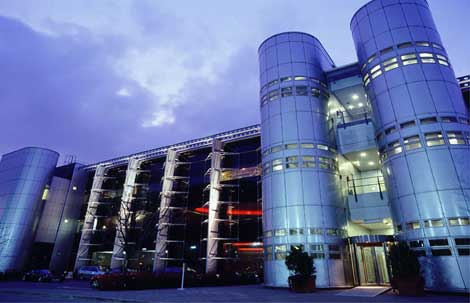 The Global Crossing data center at the Docklands in London. The company is being acquired by Level 3.

In a deal combining two operators of major Internet backbones, Level 3 Communications will acquire Global Crossing for approximately $3 billion in an all-stock deal, the companies said this morning.

"This is a transformational combination that we believe will deliver significant value to the investors, customers and employees of both Level 3 and Global Crossing," said Jim Crowe, chief executive officer of Level 3. “The complementary fit between the two companies’ networks, service portfolios and customers is compelling. By leveraging the respective strengths and extensive reach of both companies, we are creating a highly efficient and more extensive global platform that is well-positioned to meet the local and international needs of our customers."

The companies' combined network will serve a worldwide customer base in more than 50 countries and combined 2010 revenues of $6.26 billion

Under the terms of the agreement, shareholders of Global Crossing (GLBC) will receive 16 shares of common stock of Level 3 (LVLT), which at current pricing values each Global Crossing share at $23.04. That values the deal at approximately $3.0 billion, including the assumption of approximately $1.1 billion of net debt.

"This is the right combination at the right time," said John Legere, chief executive officer of Global Crossing. "This kind of combination has been talked about for years, and our companies have talked about this several times over the year. We will be a truly unique global powerhouse. Our combined platform will be allow us to move massive amounts of content around the globe."

That includes Latin America, one of the areas where Global Crossing's footprint fills a gap in Level 3's global footprint. The extra capacity in South America will be a timely addition for Level 3's growing content delivery business ahead of the next World Cup and 2016 Summer Olympics, both being held in Brazil.

"We are committed to creating a high-performing combined business through a carefully managed integration plan executed by a select team from both companies," said Jeff Storey, president and chief operating officer of Level 3. "We will begin integration planning immediately and bring an aggressive, disciplined approach to the process."

Level 3 said the deal would shore up its balance sheet, which has historically been a concern for investors.

"The transaction is expected to improve Level 3’s credit profile as well as significantly strengthen the company’s balance sheet," the companies said in their anouncement. "On a pro forma basis and including the benefit of expected synergies, the ratio of net debt (including capital leases) to Adjusted EBITDA is expected to improve from 6.8x to 4.4x as of Dec. 31, 2010." Level 3 also said it "expects to have significant free cash flow available for investment in high-return opportunities, including U.S. and international network expansions, and potential repurchase of the company’s securities.