https://www.datacenterknowledge.com/sites/datacenterknowledge.com/files/logos/DCK_footer.png
Recent
Recent
Nasdaq Partners With Amazon to Move Market Trading to the Cloud Next Year
Nov 30, 2021
Tencent Cloud To Start Selling Its Own AMD-powered Servers
Nov 29, 2021
BittWare Squeezes Ten FPGAs Into a 4U Box
Nov 25, 2021
Prepare for a More Intelligent and Connected World with Adaptive Computing
Nov 24, 2021
Trust No One: New Technology Platforms Expand the Attack Surface
Nov 23, 2021
Featured
How Submarine Cables Are Redrawing the Colocation Map
Sep 07, 2021
Colo Interconnection Services: Everything You Need to Know
Sep 10, 2021
Sponsored Content
Three Considerations for Colocation Providers
Sponsored Content
The Shape of the Edge in the Data Center
Design

Roundup: Is Open Compute A Game-Changer?

Will the new Open Compute Project be disruptive to the way the data center industry operates, and to the vendor ecosystem that supports it? Here's a roundup of notable commentary and analysis from around the Web. 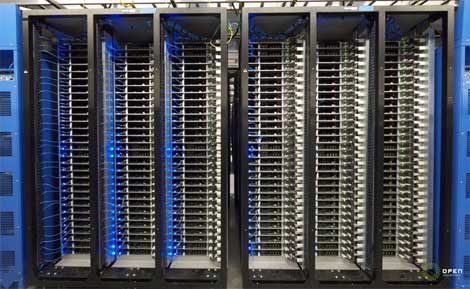 Some of the "triplet" racks featured by the Open Compute Project.

Yesterday Facebook joind with industry partners in rolling out the Open Compute Project, a new effort to create open industry standards for data center hardware and design based on Facebook's work at its new Oregon data center. On one level, the initiative represents a change in thinking about data center design, which has traditionally been closely held by innovators.

Will this effort be disruptive to the way the data center industry operates, and to the vendor ecosystem that supports it? Those were front-of-mind questions for data center industry watchers, analysts and media yesterday. Here's a roundup of notable commentary and analysis from around the Web: