Dell is deploying a fleet of 10 data centers around the world to host cloud computing services for customers, the company said today. The company plans to invest $1 billion to launch and market cloud offerings that will commence with email archiving and a hosted virtual desktop offering. 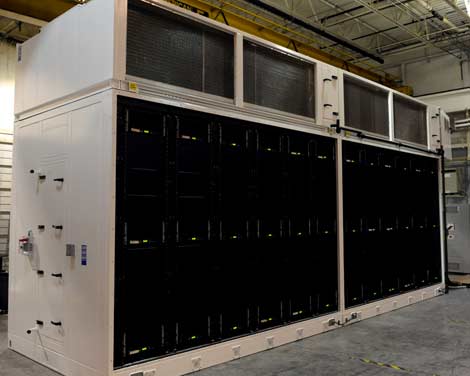 The Dell modular data center will be the lynchpin of its plans to build a global network of data centers to support its cloud computing business.

Computing giant Dell is deploying a fleet of 10 data centers around the world to host cloud computing services for customers, the company said today. The company plans to invest $1 billion to launch and market cloud offerings that will commence with email archiving and a hosted virtual desktop offering.

Dell’s move is the latest sign of the rapidly-shifting cloud computing landscape, in which the world’s largest hardware vendors are now rolling out public cloud platforms powered by their servers and software.

Building 10 Data Centers in 24 Months
“We’ve committed to build 10 new data centers around the world, and will be standing up these data centers in the next 24 months,” said Steve Schuckenbrock, President of Dell Services. “These data centers will be housing public and private cloud capabilities on behalf of our customers.”

Most of the new data centers will feature Dell’s modular data center design, a streamlined container-style unit that can house up to 12 racks, enough for 756U of server capacity. The modular approach is key to an accelerated build-out schedule in which Dell plans to complete all 10 of its new data centers in less than two years. Modules can be housed inside lightweight, affordable structures, and can house a wide range of workloads, densities and technologies.

Offerings for IaaS, PaaS and virtual desktops
Dell said its cloud offerings will target all three tiers of the cloud market, including Infrastructure as a Service (IaaS) offerings for both compute and storage, Platform as a Service (PaaS0 for application development and deployment, and an SaaS-level Virtual Desktop as a Service offering atop Microsoft’s Hyper-V virtualization solution.Dell said its cloud email archiving and Dell Desktop Virtualization Solutions (DDVS) will be available immediately in the U.S.

Dell’s cloud strategy will also target private clouds with Dell vStart, which allows enterprise customers to buy hardware configured to host blocks of virtual machines, which can then be rolled into on-premises data centers in pre-populated racks. Customers can purchase blocks of 100 or 200 virtual machines.

The data center expansion was foreshadowed in comments by CEO and founder Michael Dell, who said last month that his company would build data centers in 10 countries, including Australia.

“We’re starting with data centers outside the U.S. of roughly 10,000 square feet,” said Schuckenbrock, who said Dell would build three data centers in the U.S. and the remainder in Asia-Pacific and the EMEA (Europe- Middle East-Africa) region. “We’ve got expansion space in every location.”

Large Facility Planned for Quincy
One of the U.S. data centers will be in Quincy, Washington where Dell has purchased 80 acres of land and filed plans to build a 350,000 square foot data center. Dell officials didn’t offer details on additional locations.

But Dell’s focus on desktop virtualization – an application that requires low latency to ensure performance – suggests that many of the data centers will be adjacent to major business hubs with concentrations of enterprise customers.

“We chose the data centers based on where we currently have presence, as well as where we see the demand, and we’ve been mapping the capital investments we’re making in order to stand up these data centers,” said Schuckenbrock. “I think it’s a pretty aggressive rollout.”

For Dell, a Return to Hosting
This is not Dell’s first foray into hosting. In 2001 it partnered with Sprint to operate DellHost to offer hosting services to its many small business customers. Sprint agreed to use Dell equipment in its hosting business, while Dell agreed to buy telecom services from Sprint. But by 2003 the business hosted just 21,000 web sites, and was sold to Vericenter when Sprint decided to temporarily retreat from the hosting business.

Schuckenbrock said Dell’s $1 billion investment would include substantial staffing to sell and support its cloud services. He also pointed to the success of the Data Center Solutions unit as an indicator of Dell’s cloud capabilities.

“You’ve seen some of the thing we’ve done with our DCS business, and you can expect to see that kind of architecture with a highly-scaled out infrastructure,” he said. “I think we’ve proven our ability to do hyper-scale data centers that support some of the largest cloud capabilities in the world.”

A Crowded Cloudscape
Dell enters a cloud computing market with established incumbents featuring Amazon Web Services, Google, Microsoft and Rackspace, as well as many managed hosting companies. Dell follows the lead of HP, which recently announced plans for its own public cloud. Then there’s telcos like Verizon, which I acquiring Terremark to boost its cloud offerings.

Schuckenbrock said Dell’s focus will be on supporting enterprise customers in private and public clouds. “We’re really not trying to go after the hosting companies that do infrastructure as a service,” he said. “There’s a lot of players out there that do that very well. We’re trying to help our commercial partners and customers.”