Is it the end of the "cooler is better" attitude? The industry is looking at how a shift of a few degrees can allow for continued IT operation, while saving energy and reducing costs. Similarly, water temperatures used for cooling are on the rise also. 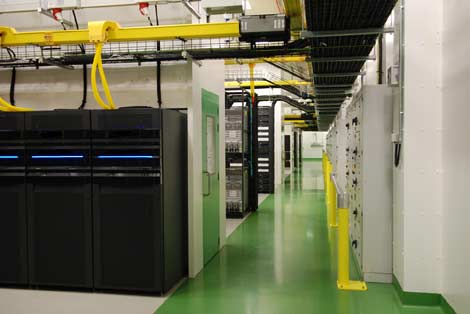 A view of the server pods in the Microsoft Dublin data center, a design which allows the company to run its servers in temperatures up to 95 degrees.

Most data centers operate in a temperature range between 68 and 72 degrees Fahrenheit, and some are as cold as 55 degrees. Raising the baseline temperature inside the data center – known as a set point – can save money by reducing the amount of energy used for air conditioning. It's been estimated that data center managers can save 4 percent in energy costs for every degree of upward change in the set point. The list of companies singing the praises of savings through higher baseline temperature settings in the data center includes Google, Intel, Sun and HP.

But nudging the thermostat higher may also allow less time to recover from a cooling failure, and is only appropriate for companies with a strong understanding of the cooling conditions in their facility.

In 2009, the leading industry group for heating and cooling professionals joined the chorus of voices calling for upward temperatures. The American Society for Heating, Refrigerating and Air-conditioning Engineers (ASHRAE) expanded its recommendations for ambient data center temperatures, raising its recommended upper limit from 77 degrees to 80.6 degrees. Last month ASHRAE indicated that it will soon expand its temperature recommendation again.

Examples of Use Cases

In live settings, companies are seeing that improved monitoring and airflow management can allow data center managers to be more aggressive with higher temperatures. In some cases, raising the temperature can allow companies to operate facilities that make minimal use of chillers - or don't use them at all.

But can servers take the heat? Recent data suggests that servers are far sturdier than previously assumed. In a landmark study, Intel  researchers operated a tested data center environment using only air cooling,  The survey found that when the temperatures were raised to 80 degrees, hardware failure rates much lower than expected. Many data centers waste energy by over-cooling the data center to compensate for lack of granular control.

That has provided a comfort level for companies to operate servers in warmer environments. Even a data center user in the Middle East and eBay in Phoenix go without chillers. Both Google and Microsoft operate facilities without chillers, using fresh air cooling.

Guest columnists at Data Center Knowledge have weighed in on the appropriate management of temperature in the data center. Jason Friedler of Telstra writes in The Data Center Temperature Debate that the "cooler is better" attitude is still challenging to overcome, despite mounting financial pressures to reduce costs. And Fred Stack of Liebert Precision Cooling detailed how to manage the expanding temperature envelope, cautioning that raising temperatures in data centers should be carried out in a systematic manner to best determine where hot spots may occur. He adds, "Care should be taken to ensure that data centers are operating efficiently without risking infrastructure shutdown because of high temperatures or contamination."

For facilities using chillers, raising the cooling set point n the data center can allow the manager to also raise the temperature of the water in the chillers, reducing the amount of energy required to cool the water and thus saving energy costs. Facebook retooled the cooling system in one of its existing data centers in Santa Clara, Calif., and trimmed its annual energy bill by $229,000. While many factors were involved, optimizing the cold aisle and server fan speed allowed Facebook to raise the temperature at the CRAH return from 72 degrees F to 81 degrees F. Thus the higher air temperature precipitated a raised temperature of the supply water coming from its chillers, requiring less energy for refrigeration. The temperature of chiller water supply was raised by 8 degrees, from 44 degrees F to 52 degrees F.

Some are deliberately pushing cooling water temperature even further. IBM deployed a supercomputer cooled by hot water for the Swiss Federal Institute of Technology Zurich (ETH Zurich). The Aquasar cooling system uses water at temperatures of up to 140 degrees, and as a result consumes up to 40 percent less energy than a comparable air-cooled machine. The system also uses waste heat to provide warmth to university buildings, reducing Aquasar’s carbon footprint even further.