A $500 million project to build a new data center for the Social Security Administration is year behind schedule, and won't be ready until 2016. Meanwhile, the agency is trying to extend the life of a problem-plagued 30-year-old facility that is critical to the SSA. 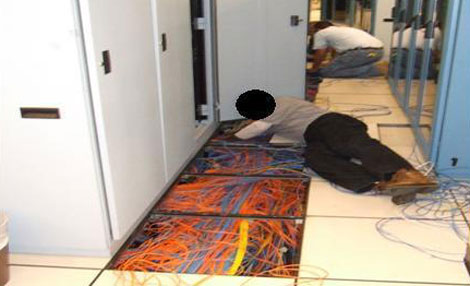 A look at the equipment area of the primary data center for the Social Security Administration, revealing some serious cable management challenges beneath the raised floor.

Nearly two years after $500 million in stimulus funding was earmarked to build a new data center for the Social Security Administration, the project  is already a year behind schedule and won't be operational before 2016. In the meantime, the agency is trying to extend the life of a problem-plagued 30-year-old facility that serves as the primary data center supporting the delivery of $700 billion in payments annually to more than 56 million Americans.

In early February, the General Services Administration (GSA) chose a site in Frederick County, Maryland to be the home of the new National Support Center (NSC) to replace the agency's aging National Computer Center (NCC) in Woodlawn, Maryland.  The site selection was originally scheduled to be completed in January 2010, but was delayed when government auditors expressed concern that the process had not given enough consideration to the cost of electric power.

The Social Security Administration (SSA) recently completed a data center in North Carolina, dubbed the Second Support Center (SSC), to serve as a backup facility for the Woodlawn site.  The agency had previously used a commercial data center as its backup. "In the event of an NCC failure, we can currently recover all critical workloads at the SSC within four days," said Kelly Croft, Deputy Commissioner for Systems at the SSA, in Congressional testimony on Feb. 11. "Next year, we anticipate being able to reduce that recovery time to one day."

Croft cited the "dire need" for a new data center.  "Without a long-term replacement, the NCC will deteriorate to the point that a major failure to the building systems could jeopardize our ability to handle our increasing workloads without interruption," Croft reported. "Despite all of our best efforts to preserve the NCC for as long as necessary, there is always the potential that a critical facility infrastructure system could suddenly fail."

Croft's testimony includes a litany of incidents and risks at the current 30-year-old NCC facility:

Despite these problems, the latest GSA timetable states the construction of the new Social Security data center will be completed in September 2014, with the agency requiring 18 months to install equipment and systems in the new facility. This places the current operational start date at August 2016. That timetable means that even as stimulus funds are supporting the completion of the new data center, the SSA will be investing in stop-gap measures to keep the NCC operational.

"Realizing that we will have to rely on the NCC for at least the next 5 years, we will do what we can to extend the life of the building," said Croft. "We are working with GSA to complete a Building Engineering Report and a feasibility study to provide an updated assessment of the NCC facility systems and structure."

"Relying on short-term fixes to serious problems at an old data center is just too much of a risk for our nation," said Rep. Jeff Denham (R-CA), chairman of the Economic Development, Public Buildings and Emergency Management Subcommittee. "That is why it is particularly troubling that the timeline for completion of the new data center has already slipped by a year. "We cannot afford any further slip in the timeline and we cannot afford any added costs. The operations of this data center are too critical for the American people and this project is too costly to allow any more delays. GSA and SSA must work together to identify risks in the process and either avoid or mitigate against them."