<img src="/sites/datacenterknowledge.com/files/wp-content/uploads/2011/02/SomersetTechnologyPark-web.jpg" alt="" width="470" height="317" /> Russo Development is planning a large data center development in Somerset County, New Jersey. The project, known as Somerset Technology Park, is located near I-287 among a cluster of data center properties about 35 miles from midtown Manhattan. 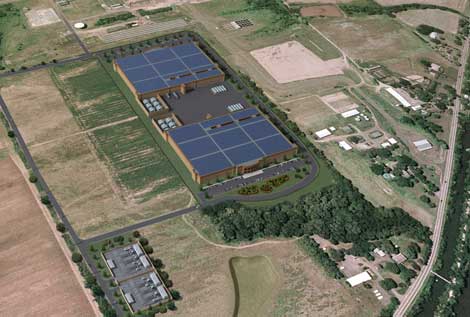 An aerial view of the site of the Somerset Technology Park, a new data center project from Russo Development in centrl New Jersey, including an illustration of a planned data center.

Data center developers continue to target central New Jersey for major new projects. Russo Development is planning a large data center development on 71 acres of land it has acquired in Somerset County, New Jersey.  The project, known as Somerset Technology Park, is near I-287 among a cluster of data center properties about 35 miles from midtown Manhattan.

The property is a greenfield site that Russo says can support more than 1.3 million square feet in multiple facilities, and features electrical power capacity of  100 megawatts from multiple 69kV feeds.  The site is also within a half mile of two large water plants providing capacity or chilled water cooling.  Russo's current plans for the site include a data center of approximately 400,000 square feet.

Somerset Technology Park will be the ninth data center development in the past decade for Russo Development. One of the company's recent projects was a huge new data center for NYSE Euronext in northern New Jersey. Russo has also done build-to-suit data centers for Credit Suisse, JP Morgan Chase, and SunGard Availability Services. The project is currently in the entitlement phase ,with site work commencing in the second quarter and delivery of the first facility scheduled for the second half of 2012.

New Jersey is one of the most active data center markets in the country. The state's data center has traditionally focused on colocation facilities and single-tenant data centers in northern counties adjacent to Manhattan and the Wall Street companies that drive demand. But the Garden State’s data center geography has grown to  include a growing market for wholesale data center space in central New Jersey, where companies like Digital Realty Trust (DLR) and DuPont Fabros Development (DFT) are building new capacity.

Russo is partnered with Sentinel Data Centers on a  230,000 square foot wholesale data center project less than one mile from the site in Somerset, with the first phase of white space scheduled for delivery this quarter.

"New Jersey is one of the top data center markets in the Country as evidenced by its significant market growth over the past five years," says Michael Pembroke, senior vice president - leasing and marketing. "Its proximity to Manhattan and lower relative utility and development costs keeps New Jersey well positioned to continue its expansion in this specialized property type."