<img src="/sites/datacenterknowledge.com/files/wp-content/uploads/2011/02/colo-wholesale.jpg" alt="" width="470" height="252" /> After years of trending upward, pricing for large colocation deals is stabilizing in some markets due to increased competition between wholesale data center providers and colocation companies, according to industry sources. 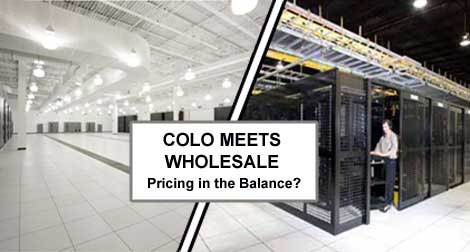 After years of trending upward, pricing for large colocation deals is stabilizing in some markets, according to industry sources, some of whom cite increased competition between wholesale data center providers and colocation companies. Although the colocation market varies from region to region, data center real estate firms and colocation brokers say customers with requirements for 300 to 500 kilowatts of critical power now have more choices, and perhaps more leverage.

Does that translate into pricing pressure for colocation providers? That depends who you ask.

Colocation providers say that pricing remains firm and their margins are not being squeezed, and suggest that competition-driven discounts are limited to a small number of active markets. Increased purchases of interconnection services are also serving to insulate colocation firms from potential moderation in pricing.

What's not in debate is that sellers of wholesale data center space are targeting smaller deals that traditionally have been prime candidates for "retail" colocation. We've been tracking this issue in recent months, in discussions at conferences, investor earnings calls and and interviews with industry executives. Here's an overview of what industry sources are saying about the issue.

More Competition on Some Deals

"The market is much more competitive," said Everett Thompson, President of Wired Real Estate Group. "Wholesale companies like DuPont (Fabros) and Digital (Realty Trust) are looking at smaller deals. Some of the colo players are competing for larger deals."

Jim Kerrigan, director of the National Data Center Practice at Grubb & Ellis, sees the same trend. "The wholesale guys are stretching for smaller deals, and the colo guys are stretching for larger deals," said Kerrigan. "That's an important point, because it impacts everybody. There are more colo players now, which is part of it. From a tenant perspective, it's driving down colo pricing."

The wholesale data center model offers greater control and security than shared colocation space, but it’s not a fit for everyone. The economics of wholesale space have historically been most attractive to companies requiring at least 1 megawatt of power capacity for their data center. As the size of the requirement increases, pricing improves, as seen in this chart from Wired Real Estate: 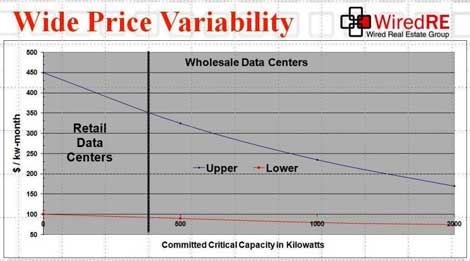 In early 2010, wholesale suppliers began competing for deals of 500 kilowatts. In recent months, some sources say wholesale players are now considering requirements as small as 300 kilowatts.

"They're starting to overlap," agreed Golding, who said this is a recent phenomena. "Two years ago, they never saw one another."

Hossein Fateh is President and CEO of DuPont Fabros Technology (DFT), which sells wholesale data center space in four market. Fateh said his company's New Jersey data center is seeing a lot of prospects considering 500 kilowatt requirements. He said customers may be considering both colocation and wholesale space in their searches, but that doesn't mean the products are equivalent or the deals are comparable.

"We think retail and wholesale are very different markets," Fateh said Wednesday in a conference call with analysts. "I think below 500 kilowatts, you're really starting to compete with retail. Potentially, a room could be divided into 300 kilowatts. But many of our tenants that are seeking 300 kilowatts would want to grow into 500 kilowatts, anyway."

That's where some customers face interesting choices about the size and pricing of their space. Fateh said that potential 300 kilowatt colocation customers may instead choose to pursue 500 kilowatt wholesale deals "because it's probably at the same price or cheaper as they were paying with retail and they have room for expansion."

Meanwhile, Digital Realty Trust has announced plans to focus on growing colocation and hosting companies as tenants for their Turn-Key Datacenter space, their flagshup wholesale offering.  That doesn't necessarily translate into smaller requirements:  the initial customer in this initiative, Fibertown, is leasing 30,000 square feet of raised floor space. But it's another indicator of a trend that may see wholesale players and large colo providers courting the same customers.

Colo Companies: It's All About Geography

What's the view from the colocation sector? "There's a lot of issues between retail and wholesale colo, which creates pricing issues in some markets," said Jim Ousley, the CEO of Savvis Communications (SVVS). "When a bunch of colocation space comes online, there can be pricing pressure.

"But it's very specific to certain geographies," Ousley added. "We have not been seeing dramatic pricing pressures. Everyone predicted the New York market would get oversaturated, but we haven't seen it."

Colocation market leader Equinix says that pricing remains firm, although it also sees differences from market to market. In North America, Equinix saw its monthly recurring revenue (MRR) per cabinet increase from $2,026 in the first quarter of 2010 to $2,069 in the third quarter before slipping to $2,059 in the fourth quarter.

That decline brought some pointed questions from securities analysts in a conference call Wednesday night, but Equinix chief financial officer Keith Taylor said the company has not seen price erosion.

"Pricing remains firm," said Taylor. "We're happy with where our price is, and we get a very good return based on the price points that we're at today.

"It's fair to say, though, that if  you try to compare a Nashville or a St. Louis to a D.C. or a New York or a Silicon Valley, the price points are going to be different," he continued. "It's clear that the market price point in those markets will be lower. And so if we sell into a lower-costing market, then that will have a dilutive effect (on overall MRR)."

In the most recent quarter, for example, Equinix had success selling cabinets in data centers it acquired from Switch & Data, many of which are located in smaller cities. Thus, while Equinix met its goal of an improved sales transition at the Switch and Data sites, the MRR receded as a result. Taylor said that kind of fluctuation is a fact of life with a geographic footprint spanning three continents and 35 cities.

"We have a very large base of customers," said Taylor. "We think $1,800 to $2,200 per cabinet is a reasonable amount that you should expect based on our selling capacity. There's certainly going to be some accounts that will be below that and accounts that are well above that. It is the averages that we're playing with. This thing's going to bump around for the foreseeable future. But I think the trend is that as long as we're focused as a company on getting the right customers and the right (data centers) with the right application, our price point should continue to be firm."