Facebook’s Expansion: How Big, How Fast?

<img src="/sites/datacenterknowledge.com/files/wp-content/uploads/2011/02/facebook-rutherford-470.jpg" alt="" width="470" height="270" /> Is Facebook planning a huge expansion of its data centers? For 2011, the company says it is focused on building its two active projects in Oregon and North Carolina and populating those facilities with servers. 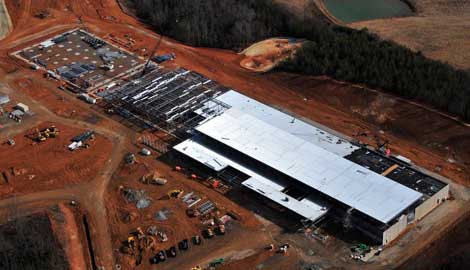 This aerial view shows the scop of the new Facebook data center under construction in Forest City, North Carolina. Click the phto for a larger version of the image. (Photo credit: Facebook).

Is Facebook planning a huge expansion of its data centers? Will it build more facilities in Oregon? There's been a lot of coverage of Facebook's data centers in recent weeks, much of it tied to the upcoming launch of its new facility in Prineville, Oregon. The news hook for several stories was the prospect that Facebook is preparing to build another data center at the Oregon site, which may be part of a data center building spree in 2011.

Make no mistake: Facebook has been the biggest growth story in the data center industry. It takes a ton of servers to constantly update news feeds and upload photos for 600 million users, which made Facebook a driving force in the market for wholesale data center space prior to "graduating" to building its own facilities. But for 2011, the company is focused on building out about 600,000 square feet of new space in its two active data center projects in Prineville and Forest City, North Carolina and populating those facilities with servers.

Speculation about additional development was prompted by a Wall Street Journal story that cited a document for investors. "In 2011, Facebook plans to significantly expand the size of its infrastructure and also to begin serving traffic from Facebook-owned data centers using Facebook-designed server equipment for the first time," the company says in the memo, which was related to a recent funding.

Facebook's announced projects certainly represent significant growth in its data center capacity. But the expansion reference led some to wonder whether there are additional projects in new geographies. Facebook's response: Not yet.

"We don't have any more expansion plans to announce," said Bob Applegate, a spokesman for Facebook's Prineville project. "We've bought a fair amount of land (in Prineville), and we've pretty clearly stated that we may add additional space as we need more capacity. For right now, we have the 300,000 square feet we've announced."

What about additional buildings in Prineville? Multi-facility campuses are a standard approach to data center construction for the largest Internet companies. Google typically plans to build at least two data center buildings in a phased approach at each of its sites, with an option for a third building. Microsoft and Yahoo each have multi-building data center sites in Quincy, Washington.

Facebook bought about 120 acres of land in Prineville, enough to support at least two buildings. Local officials told the Journal that Facebook is already discussing the next phase of its Prineville project.

But Facebook's Applegate said any discussion of additional data centers in Prineville is "extremely speculative" at this point. "The lead time on some elements of these projects is pretty long-term," he said. "So you're always in conversations about permits and energy."

In the meantime, Facebook is moving ahead quickly on its new $450 million data center project in Rutherford County, North Carolina. A significant portion of the frame for the 300,000 square foot structure is already up, and Facebook has begun advertising for data center executives to lead the project.

Facebook purchased 150 acres in Forest City, providing plenty of room to grow. The data center is expected to create more than 250 construction and mechanical jobs during its 18-month building phase, which should come online early in 2012.