https://www.datacenterknowledge.com/sites/datacenterknowledge.com/files/logos/DCK_footer.png
Recent
Recent
The Future of Edge Computing in the COVID Era
Aug 06, 2020
Microsoft Plans to Reuse More Server Parts with the Help of AI
Aug 04, 2020
Cyxtera Launches AI Hardware as a Service in Its Data Centers
Aug 04, 2020
IoT in the Enterprise: Watch out for Ransomware
Aug 04, 2020
Filecoin to Spur Decentralized Data Storage in New Internet Era
Aug 03, 2020
Featured
Resilience in a Pandemic: Smaller Data Center Providers Hang On, Hold Fast
Jun 01, 2020
How the Data Center Technology Market Is Faring in the Pandemic
May 27, 2020
Microsoft Says It’s Built a Top-Five Supercomputer in the Cloud for AI
May 21, 2020
Rules Rewritten: Managing Data Centers Through the Pandemic
Apr 07, 2020
Cloud

How big is Amazon's cloud? It's huge, and getting huger. Amazon Web Services' S3 cloud storage service housed 262 billion objects at year-end of 2010, more than doubling in size from 102 billion objects. 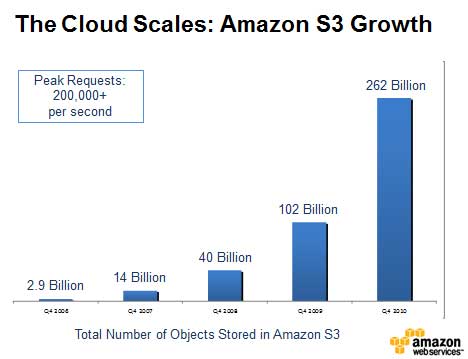 How big is Amazon's cloud? It's huge, and getting huger. Amazon Web Services said this week that its S3 cloud storage service housed 262 billion objects at year-end of 2010, more than doubling in size from 102 billion objects at the close of 2009. The peak request rate for S3 is now in excess of 200,000 requests per second, according to Amazon's Jeff Barr.

An analysis of new virtual server instances launched each day on Amazon's EC2 cloud computing service, shows a similar growth curve, with activity more than doubling between 2009 and 2010. Check out this chart from the analysis by Cloudkick and Guy Rosen (Jack of All Clouds):