<img src="/sites/datacenterknowledge.com/files/wp-content/uploads/2011/01/Google-Capex-4Q2010.png" alt="" width="475" height="262" /> Google's capital spending soared to $2.5 billion in the fourth quarter, more than three times more than the company has spent in any previous quarter. The increase was caused by Google's purchase of 111 8th Avenue, its New York headquarters building.

Spending on Internet infrastructure can be uneven. Capital spending, as Google CFO Patrick Pichette noted Thursday, "tends to be lumpy from quarter to quarter." But it's rare to see a lump the size of the one in Google's latest quarterly report, when the Internet giant reported $2.55 billion in capital expenditures - more than three times the amount Google has spent in any previous quarter.

The bulk of that spending was related to Google's purchase of 111 8th Avenue, a 2.9 million square foot building in New York that is one of the city's premier Internet and telecom hubs. It also serves as the main New York office for Google, which has about 2,000 employees on site, and Google says it bought the building to assure adequate office space for continued expansion. The company did not break out the transaction cost for the purchase of 111 8th Avenue, but media reports place the deal at $1.9 billion.

The impact of the deal can be clearly seen in this chart of Google's historic capital expenditures: 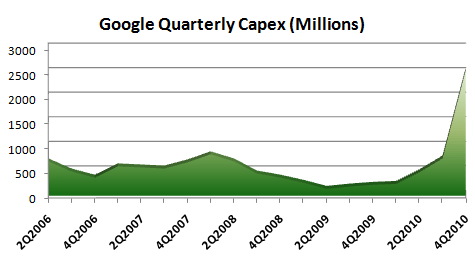 Assuming the media reports about the $1.9 billion pricetag for the New York deal are correct, that would leave about $650 million in data center investment for the quarter, near the high end of range that has varied between $140 million and $840 million from quarter to quarter. Google spent $757 million on data centers in the third quarter of 2010.