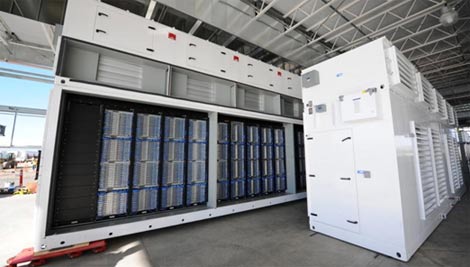 A view of several IT-PAC server modules being installed at the new Microsoft data center in Quincy, Washington.

Microsoft has completed construction on the initial phase of its new data center in Quincy, Washington, which features a plug-n-play modular infrastructure that provides extraordinary flexibility in deploying new cloud computing capacity.

The new data center features a lightweight exterior, which Microsoft  compares to a "tractor shed," filled with highly-customizable containers packed with servers, storage and power and cooling infrastructure. The modules can be deployed as new capacity is needed, and configured with a mix-and-match approach that allows Microsoft to choose among a variety of technologies and reliability levels. (See the module assembly process in our photo feature, Inside Microsoft's New Quincy Cloud Farm).

Dramatic Cost Reductions
The new facility is the culmination of years of design work at Microsoft Global Foundation Services, and offers dramatic reductions in cost and resources, which Microsoft officials say will make it one of the most efficient and sustainable data centers in the industry.

It's the second data center Microsoft has built in Quincy, and is adjacent to a 470,000 square foot facility completed in 2007. The new project implements energy efficiency improvements that should result ina  Power Usage Effectiveness (PUE) rating below 1.2, as well as many new sustainability features.

Microsoft has been discussing its modular data centers over the past several years, during which it has been refining the design for the facility that will house the containers.

"The building will actually resemble slightly more modern versions of the tractor sheds I spent so much time around during my childhood in rural Illinois," said Timmons. "The building’s utilitarian appearance belies its many hidden innovations. The structure is virtually transparent to ambient outdoor conditions, allowing us to essentially place our servers and storage outside in the cool air while still protecting it from the elements."

Steel Instead of Cement
The new Quincy building is a marked departure from the dense cement structures that house most data centers, including Microsoft's Chicago data center that marked its first effort at container-driven design. The new facility has a steel and aluminum framework, and its sides are lined with louvers to allow the entry of fresh air to cool the servers.

The interior of the building will be filled with IT PACs, which are data center containers designed to operate in all environments. Each PAC contains from 400 to 2,000 servers, depending upon the application, and has four cooling modes to maintain a server inlet temperature between 50 and 95 degrees F.

Fresh air is drawn into the enclosure through louvers in the side of the container – which effectively functions as a huge air handler with racks of servers inside. Each IT module is also equipped with an evaporative cooling system, and a mixing chamber that can mix cool fresh air with waste heat from servers to regulate temperature within the module. Air handlers atop the units then manage airflow through the servers. Waste heat exits the building through a chamber near the crest of the angled roof.

"Chunks" Instead of Phases or Pods
Timmons said Microsoft's new design allows a rapid deployment cycle that eliminates the need for construction phases, in which a facility is built in several large stages. Instead, new capacity will be deployed in "chunks" of 2 to 2.5 megawatts, Timmons said.

"We’re able to deploy in granular chunks of capacity," he said. "It gives the business a lot of flexibility."

Microsoft has extended its PAC (pre-assembled component)  concept to its power distribution infrastructure. The building provides medium-voltage distribution, but containerized Power PACs house UPS equipment and additional power conversion equipment. Microsoft is using 240 volt AC power to its servers instead of the traditional 208 volt, which can provide additional power savings.

8 Megawatts - for Now
The initial deployment in Quincy will use 8 megawatts of critical power - or about four chunks. The second Quincy building has up to 27 megawatts of power available now, which can eventually be expanded to 40 megawatts.

Microsoft has been using an "all-in" approach to evaluating its total cost of operations in the new Quincy site, according to David Gauthier, a Data Center Infrastructure Architect for Microsoft GFS. That includes a vendor ecosystem developing standardized power, cooling and mechanical components that can be integrated into multiple PAC-based  designs.

“We’ve been building this supply chain over a couple of years,” said Gauthier, to the point where Microsoft has three or four vendors competing in each area of the data center.

In recent months Microsoft has stepped up its data center construction. In June it confirmed plans to move forward with the construction of a new data center in West Des Moines, Iowa, and in August announced plans for a major new data center in Boydton, Virginia. Timmons said those sites will also use the modular  design, but will vary from the Quincy facility.

"We're continually evolving," said Timmons. "The one thing they'll all have in common is the modular aspect, but the design will differ by location. We really optimize for each local environment."