<img src="/sites/datacenterknowledge.com/files/wp-content/uploads/2010/12/google-finland.jpg" width="470" height="250" /> A video provides a look inside Google's data center project in Finland, which is converting a former paper mill into a state-of-the-art data center that will be cooled using water from the Baltic Sea. 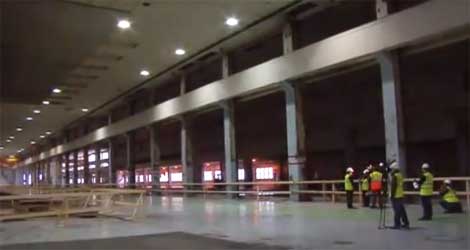 A look at the interior of a former paper mill in Hamina, Finland that Google is converting into a data center.

We recently noted that Google will use water from the Baltic Sea to cool its new data center in Hamina, Finland. Google has refurbished the water pumps used at the former newsprint plant, and will use large pipes to draw cool water from the nearby Baltic Sea. Google bought the former Stora Enso newsprint plant for $51 million in 2009, and expects to invest 200 million Euros (about $252 million) in the project. A video posted on YouTube provides a look at the inside of the Hamina facility as Google begins retrofitting the massive facility for use as a data center.  Google engineers Joe Kava and Alistair Verney discuss the building's infrastructure and innovative cooling system, which Google says has not been attempted before.

Google will use cool sea water in the cooling system for its new data center. Google has refurbished the water pumps used at the former newsprint plant, and will use large pipes to draw cool water from the nearby Baltic Sea.

A number of projects use cold water from large fresh water lakes for cooling. Cold water cooling systems that tap nearby bodies of water tend to have a high up-front cost in the pipe work, but offer huge savings over the long run.

Google built its first chiller-less data center in Belgium. Chillers, which are used to refrigerate water, are widely used in data center cooling systems but require a large amount of electricity to operate. With the growing focus on power costs, many data centers are reducing their reliance on chillers to improve the energy efficiency of their facilities. Google, Yahoo and Microsoft have all built facilities that use fresh air to cool their server rooms. In the Hamina example, Google is using chilled water, but effectively using the sea as its chiller.