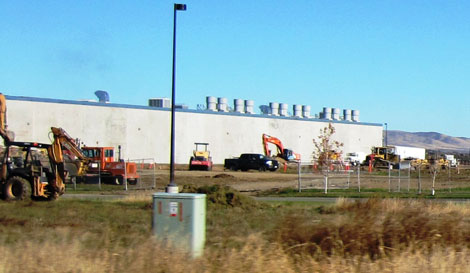 Construction equipment have begun work on an expansion of the Yahoo data center in Quincy, Washington (Photo by Data Center News Network).

The Yahoo Computing Coop is going west. Yahoo will deploy its innovative energy-efficient data center design in Quincy, Washington as it expands its campus in the fast-growing data center hub. The new facility will be built on land adjacent to Yahoo's existing 180,000 square foot data center in Quincy, which was completed in 2007.

Scott Noteboom, Yahoo’s director of global data center operations, confirmed that the company has begun construction of additional data center capacity in Quincy. "We just broke ground and will be complete by end of May," said Noteboom, who said the current phase of construction will add two  Yahoo Computing Coop modules, including one optimized for high-density workloads.

Pre-Fab, Air-Cooled Data Centers
The Yahoo Computing Coops (YCC) are prefabricated metal structures measuring about 120 feet long by 60 feet wide. Each of the coops has louvers built into the side  to allow cool air to enter the computing area. The air then flows through two rows of cabinets and into a contained center hot aisle, which is topped by a chimney on top. The chimney directs the waste heat into the upper level of the facility, where it can either be recirculated or vented through the cupola.

The YCC is an example of how standardization and the use of factory-built components can accelerate data center construction. Noteboom expects the Quincy expansion to be completed in six months, matching the deployment timetable for the latest phase at the initial YCC project in Lockport, New York.  That's a significant improvement over the 330,000 man hours required to build the company's first data center in Quincy.

New Tax Incentives A Factor
The expansion comes more than two years after Yahoo put its Quincy project on hold, citing a tax ruling that left the company ineligible for a key tax break on server equipment. The resumption of work on the Quincy campus appears to be a direct result of the  restoration of those tax incentives by the state legislature earlier this year.

In 2007 the state of Washington ruled that Yahoo was not eligible for  a state sales tax break for manufacturing enterprises in rural counties, and thus must pay a 7.9 percent tax on data center construction and equipment.  The state ruled that data centers did not qualify as manufacturing facilities.

In March the Washington legislature passed a targeted tax break would allow a 15-month sales tax exemption on the purchase and installation of computers and energy for new data centers in 32 rural counties. To qualify for the incentives, companies must commence construction by July 1, 20111 to qualify. The measure's backers are hoping for an extension, citing the level of development activity since the passage of the incentives. Microsoft, Yahoo and Sabey have all announced new phases of data center construction, while Dell has purchased land in Quincy.

Tax Breaks Key to Yahoo Plans
Noteboom said any future development in Quincy beyond the current two YCC pods would hinge on the tax situation. "We are not building capacity as far into the future as we could, due to our concerns relative to the tax incentive package," said Noteboom. " In the event that tax incentive packages in Washington don’t go well, we are continuing to discuss future opportunities in other states that could meet our future need."

For the moment, the Yahoo project places the small farm town of Quincy on the bleeding edge of data center development. Just down the street from the Yahoo Computing Coop, Microsoft is building a next-generation facility based on its container-based IT PAC design.

Quincy has become a magnet for data centers because of its abundant supply of cheap, “green” hydro power generated by area dams. Microsoft pays just 1.9 cents per kilowatt hour for its power in Quincy.