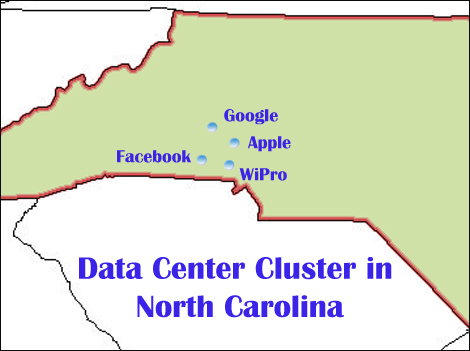 You might things couldn't get any better for the data center corridor in western North Carolina. But they almost did. This past summer a site in Cleveland County was a finalist in a site search by Microsoft, which eventually chose to build a $499 million data center in Boydton, Virginia.

Big Wins Put Region on the Map
Despite that near miss, North Carolina officials have plenty to cheer about, and believe this is just the beginning of a major data center cluster. "Now you've got three of the most recognized technology companies in the world here," said Scott Millar, the director of economic development for Catawba County. "I think it really establishes the corridor. With these companies here, any company doing a data center site search will certainly want to consider this area."

North Carolina has always had data centers in the Raleigh/Durham area, which is home to Research Triangle Park and data centers for companies including IBM, NetApp, Ralph Lauren, Peak 10, Hosted Solutions and DataChambers.

But things were far quieter in the western part of the state. The region was once a thriving area for textile mills. Many of these mills have departed or closed, leaving behind industrial-strength power and water infrastructure that's ideally suited for data center development. Duke Energy's power rates are competitive, with industrial electricity rates at about 5 cents per kilowatt hour.  State and local governments have been generous with offers of tax incentives, which have been a key factor in winning major deals. Here's a recap:

T5 is a data center development company led by former data center specialists with The Staubach Company. The company is focusing on North Carolina, and marketing multiple sites for major end users. T5 is currently building a second data center at its Kings Mountain campus (where Wipro leased its first building) and also has a site in Maiden that has attracted interest. Five 9s Digital is also marketing multiple sites in the region, as are county officials.

The success of western North Carolina demonstrates the evolution of the data center marketplace, where major facilities were historically clustered in bandwidth hubs like northern Virginia and Silicon Valley.

"There will be new markets that emerge," said Marin. "These 50 megawatt requirements will forge the new frontier."