SoftLayer Technologies and The Planet have completed a blockbuster merger to create one of the world’s largest providers of web hosting and cloud computing services, with 25,000 customers and 76,000 servers. 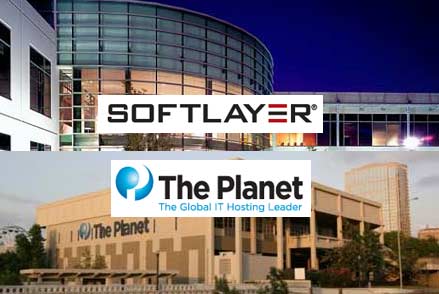 SoftLayer Technologies and The Planet have completed a blockbuster merger to create one of the world’s largest providers of web hosting and cloud computing services. The deal's closing was announced today by private equity firm GI Partners, which holds controlling interests in both companies. The merger plans were first disclosed in August, shortly after GI Partners completed its acquisition of SoftLayer.

More Than 76,000 Servers
The new SoftLayer has more than 25,000 customers and 76,000 servers in 13 data centers across the United States and Europe. The combined company will offer dedicated and managed hosting, cloud services (including hybrid environments), and colocation. SoftLayer will have $260 million in revenue for 2010, and $103 million in EBITDA.

"SoftLayer and The Planet come together with a shared and deep commitment to innovation, to excellence, to our teams, and to meeting customers’ needs like no one else," said Lance Crosby, who will continue as SoftLayer’s Chief Executive Officer. "Those values will continue to guide the new SoftLayer, as we make the transition as seamless — and advantageous — as possible for customers, employees, and all stakeholders."

"The combination of these two powerful platforms creates a global leader with improved scale, accelerated innovation, broader product offerings, complementary strengths, and unparalleled management depth," said Richard Magnuson, Executive Managing Director of GI Partners. "As active investors in the industry, we look forward to working with Lance and his team to build an even stronger company in the future."

But not right away. SoftLayer management has already begun communicating with customers of both companies about the merger process. A key question: what will the merger mean for customers of The Planet?

The companies have moved rapidly to integrate operations to make it easy for customers of The Planet to either continue using their current management platform or access the SoftLayer customer portal to provision new services.

"We are much more integrated today than anyone could have expected," said George Karidis, SoftLayer Chief Strategy Officer, who has led the integration effort. "That's because we've had such a long head start." The consulting company Bain assisted with the transition.

But the transition effort also benefited from the companies' familiarity with one another. SoftLayer was formed by veterans of The Planet who left the company. "The management teams know one another well, and I think that helped," said Karidis.

The merged management lineup is dominated by the SoftLayer team, but includes several former Planet staffers in key roles. Duke Skarda, VP of IT and Development at The Planet, will become Chief technology Officer of SoftLayer, while Tom Blair, who headed the sales effort at The Planet, becomes senior VP of sales.

Debt financing for the transaction will provide SoftLayer with "substantial liquidity to fund growth," and was arranged by a syndicate led by SunTrust Robinson Humphrey and RBC Capital Markets, and including Societe Generale and Bank of America Merrill Lynch as Co-Documentation Agents.