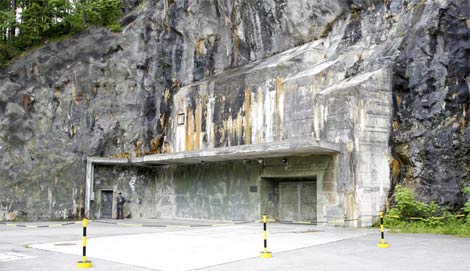 The entrance to the "Swiss Fort Knox" data bunker beneath the Swiss Alps.

Subterranean "data bunkers" in unusual locations continue to stir the imagination of the technology world. The latest data hideout to enter the spotlight is the "Swiss Fort Knox" facility deep below the Swiss Alps, which offers ultra-secure data storage in a nuke-proof data center. The facility was featured in the November issue of Wired magazine.

Like many of the data bunkers profiled here at Data Center Knowledge, the Swiss Fort Knox facility takes advantage of existing infrastructure. in this case an old Cold War bunker built by the Swiss military and designed to survive a nuclear blast. The facility is really two separate data centers about 10 kilometers apart, which were developed over the past 15 years by SIAG (Secure Infostor AG), a Swiss provider of IT security solutions. Two related companies, Mount 10 Swiss Data Backup and SISPACE AG, provide services within Swiss Fort Knox bunker, with Mount 10 providing secure data backup while SISPACE focuses on records storage and management.

The data center also takes advantage of the cooling potential presented by its location deep under the mountains. The facility uses Mother Nature as its chiller, pulling glacial water from an underground lake to use in its cooling systems. It also features survivalist-level security measures, including face-recognition surveillance software, bulletproof plastics and vault doors courtesy of the Swiss banking industry.

More details of the facility's operation are available at the web sites for Mount 10 and Swiss Fort Knox. 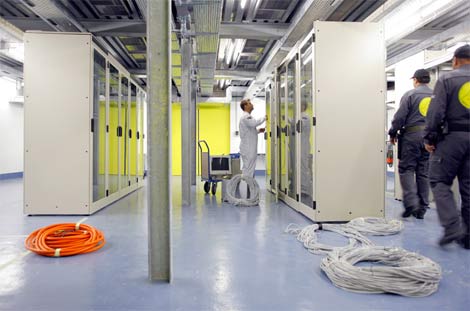 A look at the data rooms inside the Swiss Fort Knox data bunker.

For more on data bunkers, check out these stories: