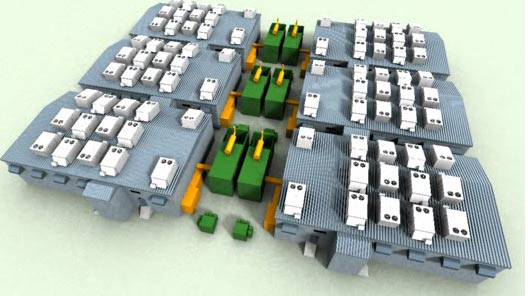 A model of a deploymnt of multiple NxGen data center structures, from a demo video.

NxGen Modular is among the vanguard of modular data center vendors that go beyond ISO standard shipping containers with flexible designs that resemble traditional data centers, but can be built cheaper and faster than typical greenfield projects.

The Redwood City, Calif. company is headed by President and CEO Kris Holla, an industry veteran who most recently served as an executive vice president at Emerson Network Power's Knuerr division, which specializes in enclosures. NxGen uses multiple container frames to assemble a structure, an approach also used by BladeRoom in the UK and Australia's DataPod.

NxGen's first customers are not named, but the descriptions make it clear that some of the largest technology companies are taken with the company's approach:

End-to-End Service
Holla says NxGen Modular can handle the entire process of provisioning and delivering a modular data center project, working with equipment vendors and construction contractors to streamline the process. "This is completely different from most of the (modular) solutions that exist today," said Holla.

Many of the early players in the sector have been server companies using containers as a form factor for volume sales. That's now changing, with new market entrants including integrators (Lee Technologies) and colocation providers (i/o Data Centers).

Each NxGen data center is tailored using a selection of 50 pre-engineered, factory tested modules that are assembled according to a company’s specific needs. The company's flagship product is the 600 kW NxCenter, which is assembled from seven 12-foot by 60-foot steel-framed modules. NxGen also offers an NxModule, which resembles a traditional container product, and the NxPower module providing an electircal pwoer room.

A Modular 'Pizza' With Custom Toppings
The standard NxCenter comes with DX cooling and cold aisle containment, but Holla says the design can be customized to use a wide range of power and cooling configurations. Holla compares the approach to ordering a pizza - each pizza has the essential crust, sauce and cheese, but diners can add whatever custom toppings they desire.

Holla says NxGen is "vendor neutral" and is already working with Eaton and Emerson Network Power, as well as DPR Consruction.

“For companies facing pressure to reduce upfront and total costs and reduce cycle time, NxGen offers a solution that’s unique in our industry,” said Eric Lamb, executive vice president of DPR Construction. “NxGen has leveraged the experience of leading data center engineers and builders to develop a modular offering that can be adapted and scaled to a company’s specific needs.”

Holla says the modular data center market is evolving, and sees similarities to the adoption path for other new technologies.

"This is similar to when I was involved with the water-cooled business at Knuerr," said Holla. "In 2002 people said they didn't want water in the data center. Now it's well accepted. Our product comes at a good time and a good place. Our industry is at an inflection point."