https://www.datacenterknowledge.com/sites/datacenterknowledge.com/files/logos/DCK_footer.png
Recent
Recent
NVIDIA Unveils Morpheus AI Cybersecurity Framework
May 05, 2021
Top 10 Data Center Stories of the Month: April 2021
May 05, 2021
2021 State of the Edge Report Shows Impact of COVID-19 on Edge Use
May 03, 2021
Arm’s New Neoverse V1, N2 Chips Take on Intel in the Data Center Market
May 03, 2021
Five US Agencies May Have Been Hacked Through Ivanti Flaws
Apr 30, 2021
Featured
The Pros and Cons of Kubernetes-Based Hybrid Cloud
Feb 19, 2021
How Hyperscale Cloud Platforms are Reshaping the Submarine Cable Industry
Feb 17, 2021
Data Center Provider Cyxtera to Go Public Via $3.4B Starboard SPAC Deal
Feb 22, 2021
Managing Encryption for Data Centers Is Hard. And It Will Get Harder
Feb 16, 2021
Design>Power and Cooling

The Next Efficiency Frontier: Underclocking 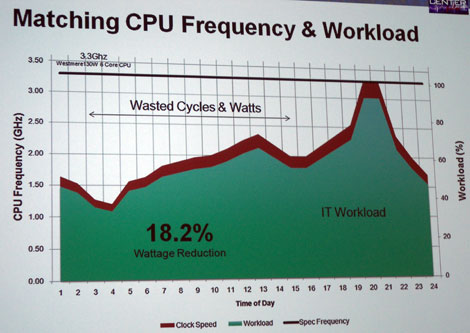 Early results of testing suggest that overclocking and underclocking processors as workloads fluctuate can reduce a server's energy use by as much as 18 percent, according the Dean Nelson, a co-founder of Data Center Pulse.

Overclocking a computer's processor or memory causes it to go faster than its factory-rated speed. The extra speed results in more work being done by the processor, boosting the performance of the machine. Overclocking is popular among users seeking peak performance, and is particularly popular among gamers. Underclocking, which is modifying the clock speed to a lower rate, is typically used to save power or reduce heat generated by the processor.

"We said 'let's overclock all of these and see what happens,'" said Nelson, who presented preliminary results of the research at the Data Center Efficiency Summit  on Oct. 14 in San Jose, Calif. "Why aren't we doing this stuff? Intel already has all the hooks in there to adjust the frequency of the CPUs. There is software available to do it.  The point is, we were able to go in there and figure out how to do it."

Nelson noted that the overclocking he's discussing differs from the overclocking common among video gamers, which typically is boost performance over lengthy stretches of consistently high CPU activity. In this case, the goal is to capture potential gains from machines where the workload varies over time.

Combination of Performance Management Techniques
Nelson says the efficiency gains are captured through a combination of overclocking and underclocking. As the workload diminishes, the CPU slows. As it rises, the CPU speeds up to accommodate.

"The net savings is real. said Ray Pfeifer, Senior Vice President of Business Development at SynapSense.  "We're basically telling the CPU to lower its voltage and lower its performance."

The Data Center Pulse tests aren't the first to explore energy savings though "adaptive" management of clock speed. Researchers from the University of Rhode Island have demonstrated an approach to dynamically manage CPU frequency and voltage on a PC, while also monitoring temperature (PDF report).

More recently, Intel has added a TurboBoost feature in its Nehalem chips. With TurboBoost, the processor can detect when it’s running below its capacity and below the limits on temperature and power usage, and can then increase its clock frequency to handle an increased workload. When the workload decreases, the processor slows back down to its normal frequency.