<img src="/sites/datacenterknowledge.com/files/wp-content/uploads/2009/08/google-pryor-towers.jpg" width="470" height="298" /> Google is resuming work on a major data center project in Pryor, Oklahoma, saying it will soon need to being additional data center capacity online. The $600 million Oklahoma project was delayed due to the slowing economy, but is now expected to be online by the end of 2011. 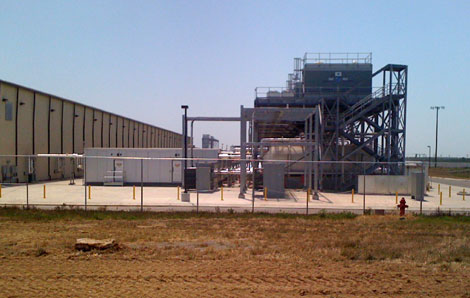 The exterior of the Google data center in Mayes County, Oklahoma shortly after construction was halted on the $600 million project.

Google is resuming work on a major data center project in Pryor, Oklahoma, saying it will soon need to being additional data center capacity online. The $600 million Oklahoma project was originally scheduled for completion in 2009, but was delayed due to the slowing economy. It is now expected to be operational by the end of 2011.

"Over the course of the next year and a half, Google will be building out this facility, installing servers and creating jobs in Mayes County," Google said in a statement. "We always intended to make the Mayes County data center operational at some point. In 2008, we determined that it was unnecessary to bring the Mayes County site online as we already had enough server capacity to meet current demand. Since then, Google’s traffic and products have continued to grow, and we believe it’s time to make this site operational."

“We’d like to thank the people of Mayes County for their patience and we look forward to becoming an even bigger part of your community going forward,” said Paul Froutan, Director of Hardware Operations for Google. “We will keep you informed as we bring this data center online.”

Google's need for additional capacity of reflected in the dramatic ramp-up in data center spending in recent months. The company spent more than $750 million on data center-related capital expenditures in the quarter that ended Sept. 30, nearly as much as it spent in all of 2009.

Google announced the Oklahoma data center project in May, 2007, when it purchased 800 acres of land in Pryor for a massive facility that would employ 100 workers with an average salary of $48,000. The Pryor project was the third of four data center construction projects Google announced in the first half of 2007. The search company has completed the initial phases of the other projects, located in Lenoir, North Carolina, Goose Creek, South Carolina and Council Bluffs, Iowa.

Google received both sales tax and property tax incentives from the state and local governments in Oklahoma, and legislators also passed a law allowing municipal power companies to not report power usage by their largest industrial customers – which in this case made it possible for the local utility in Pryor to not disclose Google’s energy usage.