<img src="/sites/datacenterknowledge.com/files/wp-content/uploads/2010/10/svlg-tschudi.jpg" width="470" height="353" /> An industry association for DC power adoption has formed a new technical standards committee for data centers, and is advancing a 380-volt DC power standard as part of its hybrid alternating AC and DC platform. 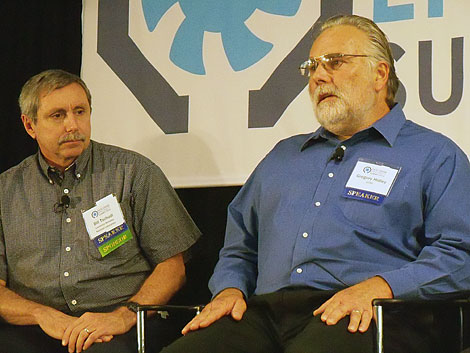 Bill Tschudi of Lawrence Berkeley National Labs and Greg Hidley from the University of California at San Diego participate in a panel at the Oct. 14 SVLG Data Center Efficiency Summit about the potential for energy gains using DC power distribution.

An industry association for DC power adoption has formed a new technical standards committee for data centers, and is advancing a 380-volt DC power standard as part of its hybrid alternating current (AC) and DC microgrid platform. The EMerge Alliance says its open architecture focuses on reducing or eliminating inefficient AC to DC conversions.

"We’re moving forward with the next phase of our plan, which will help make DC power distribution a reality in data centers and, ultimately, for entire buildings," said EMerge Alliance Chairman Brian Patterson.

The debate over the relative merits of AC and DC power dates all the way back to the 1880s and the "War of the Currents" between power pioneers Thomas Edison and Nikola Tesla. Many data center professionals remain leery of DC power, and some vendors argue that high-voltage AC configurations would be a better approach than DC power distribution. Proponents of DC power note that it has been used for years in telecom central offices, and say DC distribution would allow for easier integration of "green" energy as renewable power sources slowly gain traction in data centers.

The potential advantages of DC power have been studied by Lawrence Berkeley Labs, The Green Grid and Intel (in a joint effort with HP and Emerson Network Power).

Thus far the adoption of DC power in data centers has been limited, with the highest-profile installations seen in prototype facilities like the new Syracuse University data center, which features a power distribution system from Validus DC Systems. Researchers at the University of California, San Diego are running several racks of servers in a 20-foot data center container using a DC power rectification system made by Emerson Network Power.

Intel Testbed in New Mexico
Intel Labs is now planning an installation that will showcase the 380-volt DC EMerge standard at its New Mexico Energy Systems Research Center. "In order to accelerate market adoption of DC power distribution with telco and IT data centers and beyond, we need industry-wide participation to develop a standard that will enable compatibility and interoperability of all parts of the system,” said Guy AlLee, a research scientist with Intel Labs. “The secret to maximizing energy efficiency is to use the highest possible voltage with the fewest number of power conversions while staying with volume components. We’re working on solutions that can accomplish both for significant savings in data centers."

The EMerge effort hopes to build momentum for DC distribution. The EMerge Alliance board has appointed EPRI’s Dennis Symanski to chair the new data center standard committee. A new Corresponding membership classification has also been created to allow government, academic and other interested parties to contribute to the development of EMerge standards through participation in technical committees.